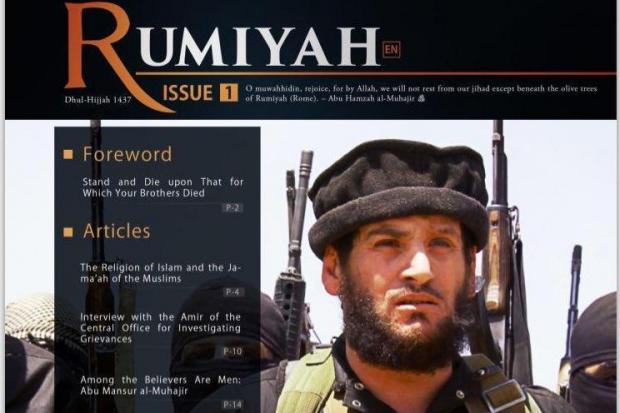 Islamic State-affiliated Rumiyah magazine offered some marital advice to fighters in its latest issue, telling them to stop gossiping about their wives in public.

The article, titled “The Flesh Of Your Spouse Is Poisonous,” told readers that gossiping about one’s domestic life shows a “lack of manliness.”

“Spouses who speak about each other should know that every secret of their home that is revealed and every ill-spoken word is akin to tears in their clothes,” said the article. “The more the number of holes and the larger the holes are, the more the fabric of matrimony will inevitably decay, and no amount of patchwork will help after that.”

The article also told ISIS wives to stop speaking ill of their co-wives. It claimed that some women insult and curse their co-wives “due to excessive jealously.”

“Every Muslim woman should remember that any disparagement of her Muslim brother or sister, even with a mere gesture, is prohibited slander, which is one of the greatest sins,” warned the magazine.

Rumiyah, Arabic for “Rome,” is one of the better-known pro-ISIS publications. It has been in existence since the rise of the terrorist organization in 2014. Rumiyah’s stories include everything from the aforementioned marital advice column to instructions on how to perform terrorist attacks.

The so-called caliphate’s laws allow an ISIS fighter to take up to take three wives, however, the group is also known to take women as sex slaves. Life for women in the caliphate is generally brutal. Reports of mass rape, abuse and harsh rules applied to everyday life are common.

Prof: Statistics Are ‘NOT Analytical’ And Wage Gap Is ‘Very Real’

How Do Libertarians View the Student Debt Crisis in the United States?