SAN FRANCISCO, CA – Sarah Slocum was at a bar last month when patrons began noticing her head gear, and were not making their disdain a secret. “You’re ruining our city,” one woman says, while others attempt to shield their faces. In her KRON 4 interview, she says, “They were trying to shield themselves as if I was recording them, and I wasn’t even, you know, it wasn’t on, I wasn’t using it.” This statement is hilariously played over video of her doing exactly what she claimed she wasn’t doing, and ends with a man reaching for her glasses to remove them.

The term “glasshole” gets thrown around a bit, but in Slocum’s case, I think it applies. She was clearly upsetting people in her quest for “tech advocacy”, but she apparently wasn’t too upset when she tried to use her story to get some freebies. She recently tweeted: 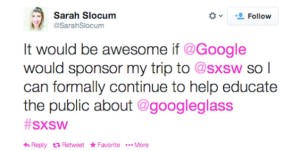 It seems Google declined to take her up on that, probably because they still have no idea who she is. For her part, Slocum chalks up the incident to a “hate crime” against tech savvy people. “What makes this story special is that no one has experienced a hate crime or been targeted for a hate crime, which is what it was, for wearing Google Glass,” she claimed. If she had only followed the etiquette Google Glass espouses, she’d have avoided this whole mess. It clearly states that, “Standing alone in the corner of a room staring at people while recording them through Glass is not going to win you any friends … The Glass camera function is no different from a cell phone so behave as you would with your phone and ask permission before taking photos or videos of others.”

Lena Dunham threatens to leave acting because Hollywood is too sexist

Moms Demand Action for Nothing

From Apple To Amazon, 18 Tech Bigwigs Are Going To Meet With Trump