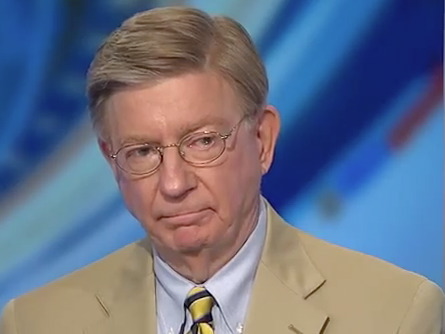 George Will threatens there will be a third-party movement to save “conservatism” if the 2016 general election is between Donald Trump and Hillary Clinton. But why now? Too little, too late?

[dropcap size=small]G[/dropcap]eorge Will, well-known journalist and author of the 1983 book Statecraft as Soulcraft, is on the verge of spitting full-forced paroxysms in the direction of a man he sees as lacking the proper “virtue” and conservative credentials to lead the GOP–Donald J. Trump. Whereas Will’s Statecraft as Soul is a somber, “other directed” communitarian call for the government to “instill virtue” in the populace, Trump’s The Art of the Deal is a self-praising memoir and advice manual in which Trump reveals many of his deal-making techniques, including what Trump calls “truthful hyperbole.” Listening to George Will today, I can’t help but wonder if he’s been taking lessons from Mr. Trump on how to make people believe what you’re selling is, as Trump says, “the biggest and the greatest and the most spectacular…It’s an innocent form of exaggeration – and a very effective form of promotion.”

Speaking to the establishment interlocutor of conservative talk radio, Hugh Hewitt, George Will had this to say about the potential GOP nomination of Trump:

[Y]ou would have to also figure that there would be movement to have a third party candidate because if the election is Hillary Clinton against Donald Trump, this will be the first election since God knows when there was no real conservative candidate. And I don’t think those of us who started our political careers — and I cast my vote for Barry Goldwater, who valued that classic, creative defeat of his because he took the Republican Party and said, ‘henceforth it will be a conservative party.’

Those of us who feel that way are not about to sit idly and see the Republican Party — which was saved by William Howard Taft in 1912 for conservatism, that was reclaimed by Barry Goldwater in 1964 for conservatism — we’re not going to let it disappear in 2016.

Now, I would hardly call Hillary Clinton or Donald Trump conservatives, but how can Mr. Will say with a straight face that their matchup would be “the first election since God knows when there was no real conservative candidate?” Oh yes, George, when I think of carrying the mantle of Barry Goldwater, I immediately think of Mitt Romney, John McCain, George W. Bush, Bob Dole, and George H. W. Bush.

Either George Will is engaging in “truthful hyperbole” or he really believes what he is saying. I hope it is the former, but if Mr. Will really is serious, I must say the term “conservative” is a nearly meaningless word or is being used in a post-modern way; a simulacrum born of a long gone era now bereft of its initial significance. If we are to believe Mitt Romney’s conservatism was the stuff of Barry Goldwater’s, then we must also be prepared to say margarine is literally butter.

To call for a third-party would most likely do harm to the “conservative” cause as well. I am tempted to say good riddance. Let those in the tea-party, those who love the constitution, those who love the Bill of Rights, drop the label “conservative” altogether. Let them reclaim the banner of “classical liberalism,” for their project ahead–restoring the liberties of the nation and putting it back on a sound fiscal and monetary footing–hardly demands conserving anything. No, the project ahead calls more for the spirit of 1776 than Taft’s 1912 or Goldwater’s 1964.

I am no fan of Mr. Trump, but it’s not because I have a great deal of respect for “conservative” ideals or love for the GOP establishment. No, if I am being honest, I must tell you I don’t want anyone to be president, and I expect to be mightily disappointed later this year. I am resigned to watching this 2016 farce with glee and contempt, hoping the farce won’t soon turn to tragedy.

What is it about a presidential election cycle that spurs the American people to such fits of hyperbolic pronouncement, meaningless speculation, and false hope that their choice will truly lead to a government representative of their ideals?

This isn’t a rhetorical question. I’m genuinely asking. I am bumfuzzled by the current  partisan and intra-party haranguing. When I look at the  civil war of “ideas” being carried on by the politicians, the pundits, and the people, I have trouble making sense of their fervor. Despite their intense disagreements on the surface, I see little difference between the parties. Or rather, I see all of us in this nation as beholden to the momentum of history. Our government institutions seem to be controlling and constraining us when it should be the very opposite.

Maybe, I am not alone in this assessment. Maybe, just maybe, this is why there is, for better or worse, such a populist sentiment sweeping the nation. The people are tired of being told they must be good party members and that “intellectuals” such as George Will and Hugh Hewitt should be seen as members of a priestly class defending the true faith of “conservatism.”

Mr. Will is a man of ideas. Mr. Trump, undoubtedly, is a man of action. And in this current political climate where tried and true political ideas seem untrustworthy, I do not think it is too bold to say Trump and his throng of supporters will show the contemplative George Will that “conservatism” has been dead on the vine for some time now.