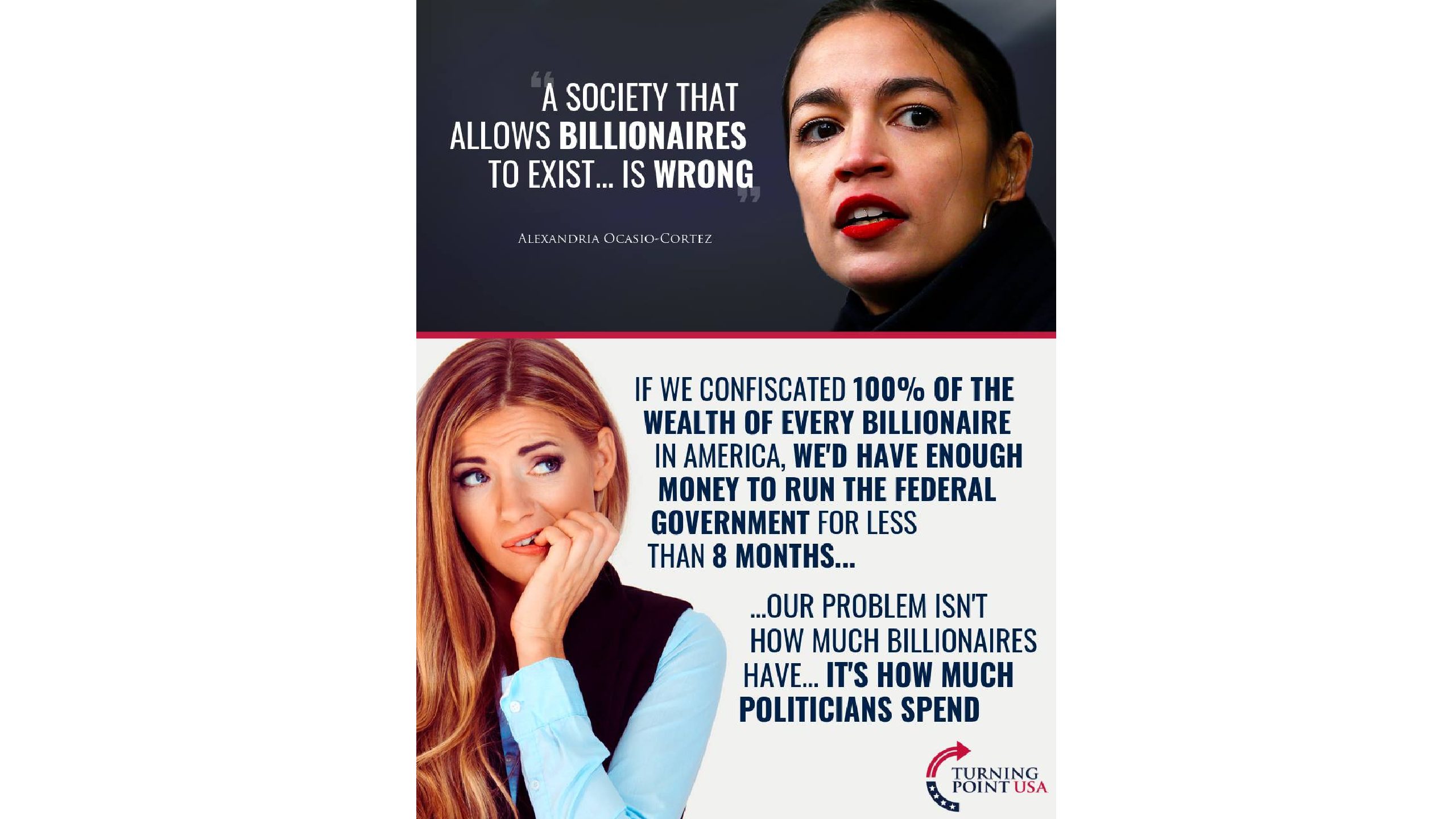 The conservative student organization Turning Point USA posted a meme that claimed that the wealth of all the billionaires in the U.S. could fund the federal government for less than eight months.

“If we confiscated 100% of the wealth of every billionaire in America, we’d have enough money to run the federal government for less than 8 months…

…Our problem isn’t how much billionaires have… It’s how much politicians spend,” the Feb. 3 meme read.

The claim was based on figures produced by Forbes in 2016, when U.S. billionaires were estimated to have a combined net worth of $2.4 trillion. It cost $2.6 trillion to run the government for eight months in fiscal year 2016.

The estimated number and collective net worth of billionaires has increased since 2016, and their combined wealth could now run the government for nine or so months. Although Turning Point isn’t far off the mark, the figure is no longer “less than” eight months.

The meme mentioned the wealth of U.S. billionaires in response to comments made by Democratic Rep. Alexandria Ocasio-Cortez at a Martin Luther King Jr. event in January. She agreed that living in a system that allows for billionaires is not a moral outcome per se.

“I don’t think that necessarily means that all billionaires are immoral,” Ocasio-Cortez said. “But I do think a system that allows billionaires to exist when there are parts of Alabama where people are still getting ringworm because they don’t have access to public health is wrong.”

A spokesperson for Turning Point told The Daily Caller News Foundation that the meme drew inspiration from a Feb. 1 tweet from Antony Davies, an economics professor at Duquesne University and co-host of a podcast produced by the libertarian Foundation for Economic Education.

“The 550 US billionaires together are worth $2.5 trillion. If we confiscated 100% of their wealth, we’d raise enough to run the federal government for less than 8 months,” Davies tweeted. “Perhaps our problem isn’t how much billionaires have but how much politicians spend.”

Davies told TheDCNF that his figures were approximations based on figures from a few years ago. He pointed to a Forbes estimate of U.S. billionaires’ wealth for 2016. It identified 540 U.S. billionaires worth $2.4 trillion combined.

The Congressional Budget Office (CBO) said that federal outlays totaled $3.9 trillion in FY 2016, which amounts to $2.6 trillion of spending, on average, for eight months – more than the net worth of all U.S. billionaires.

Forbes has identified more billionaires since 2016, however, and their current estimated net worths could now fund the government longer than eight months.

There were $4 trillion in federal outlays in FY 2017, according to CBO. Using a simple average, it cost $2.7 trillion to fund the government for eight months. Forbes reported that there were 565 billionaires in 2017 worth a collective $2.8 trillion. While their estimated net worths could together fund the government for a full eight months, it wouldn’t have covered the outlays through the ninth month.

The CBO calculated $4.1 trillion in FY 2018 outlays, which still equates to $2.7 trillion for eight months. The 585 U.S. billionaires Forbes identified in 2018 were worth $3.1 trillion combined, which could cover a whole nine months – a cost of $3.1 trillion.

Switzerland-based financial services firm UBS, in partnership with professional services company PwC, also estimates the number and wealth of billionaires in the U.S., as does global data company Wealth-X. Their most recent figures for 2017 are very close to Forbes’ figures calculated in February 2018.

Davies cautioned that the net worth estimates are not exact. “The numbers vary by year,” he told TheDCNF in an email. “The ‘official’ numbers themselves are approximations.”

UBS/PwC and Wealth-X use proprietary information to calculate their estimates. Forbes estimates billionaires’ net worth by valuing their financial stakes in companies, real estate and other assets, but acknowledges that it doesn’t know each person’s private balance sheet.

“Some people will become richer or poorer within weeks—even days—of publication,” Forbes noted, due to changes in stock prices and exchange rates. On Jul. 27, 2017, for example, Amazon founder and CEO Jeff Bezos was the richest man in the world for only a few hours.

Forbes will sometimes make significant changes to estimates of wealth as new information becomes available. It previously estimated, for instance, that Secretary of Commerce Wilbur Ross had an estimated net worth of $2.5 billion, but Forbes lowered the estimate to less than $1 billion after Ross’ financial disclosure form showed under $700 million in assets. Ross disputed Forbes’ revised estimate and said that his family trusts, which he did not have to disclose, are worth more than $2 billion.

Mika From ‘Morning Joe’ Says Ocasio-Cortez Makes Her Cringe With Lack Of Experience, Wants To Give Advice