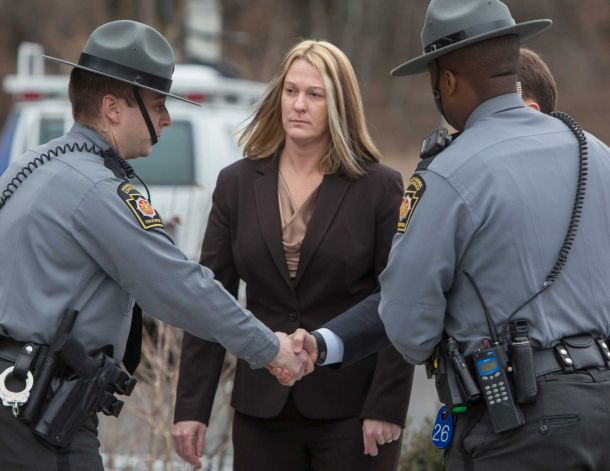 A Pennsylvania police officer was charged with homicide on Tuesday on allegations that she shot a man twice in the back as he was face down on the ground. The shooting was captured on the stun-gun video camera and prosecutors say it provides “strong evidence” against the officer.

Lisa Mearkle, a Hummelstown Police Department officer, said she acted in self-defense on February 2, when she attempted to pull over David Kassick for driving allegedly with expired tags, according to reports. Mearkle stated that the that he sped away briefly and then fled his vehicle. With the stun gun in her left hand, she fired it several times in a bid to incapacitate him, she said. As he was on the ground, the authorities say she shot him twice in the back with her pistol.

“At the time officer Mearkle fires both rounds from her pistol, the video clearly depicts Kassick lying on the snow-covered lawn with his face toward the ground. Furthermore, at the time the rounds are fired nothing can be seen in either of Kassick’s hands, nor does he point or direct anything toward Officer Mearkle,” the affidavit said.

Police said that although a hypodermic needle was found at the scene, there was no weapon found and the victim was reported to be under the influence of alcohol.

CT.com reported statements from Mearkle’s attorney, Brian Perry stating that Mearkle purposely kept her Taser pointed at the man to document what occurred, not thinking it would be used against her.

She shocked him four times before shooting him when he did not comply with her commands to show his hands, police said.

“Lisa was aware that the Taser contained a video camera, and she held the Taser trained on Mr. Kassick, knowing that the incident was being recorded,” Perry said Wednesday. “That’s one of the reasons she’s so adamant she didn’t do anything wrong. ‘Why would I want it recorded if I thought I did something wrong?'”

Dauphin County District Attorney Edward Marsico Jr., surprised that stun-gun had a recording device, told a news conference that the roughly 90-second video was the strongest piece of evidence behind the decision to prosecute 36-year-old police officer Lisa Mearkle, a 15 years veteran on the police force.

“I did not know until this case occurred” that some stun guns include cameras, Marsico said. “Many of us in law enforcement did not know.”

There has been a national discussion regarding officers being equipped with recording device, particularly after the  Ferguson, Missouri shooting. Body cameras may have revolutionized police accountability, so much so that President Barack Obama had pledged federal aid for as many as 50,000 body cameras, in December.

“For the most part they’ve been a tremendous tool to take out the doubt and uncertainty when a Taser device is deployed and what the circumstances were during an incident,” A spokesperson from Taser, Steve Tuttle said.

The officer’s attorney, Brian Perry, claims charges are false and that the officer responded lawfully.

“She felt like she had to do what she did,” Perry said. “This person was being commanded, begged, ‘show me your hands,’ and he kept going to his waist.”

Marsico has declined to release the video, though it may possibly be viewed at Mearkle’s preliminary hearing scheduled for next month.

Protesters Beg KC Officials Not To Drive Uber Away