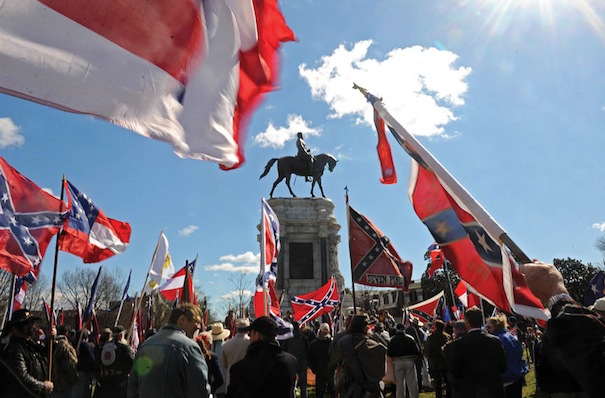 Amazon is joining other big retailers, like Walmart and Sears, that announced they will ban sales of the Confederate flag, and other flag-related items from their shelves, despite the fact that sales appear to be booming on the website.

Currently, though, the Confederate flag is considered one of Amazon.com’s “movers and shakers” after sales skyrocketed in the last 24 hours.

RELATED: Why Libertarians Should Distance Themselves From The Confederacy

Sales of the flag shot up more than 3,600 percent on the website after South Carolina Governor Nikki Haley and Senators Lindsey Graham and Tim Scott called for the flag’s removal from the State Capitol.

A search on Amazon for “Confederate flag” returns just under 30,000 results, with items ranging from knives to flasks and bikinis. The flag is currently the number one best seller in the “Outdoor Flags & Banners” category.

The picture below shows that five of the top six best sellers on the site are related to the Confederate flag.

eBay announced Tuesday that it would also ban sales of the flag on its website, though a search of the website shows thousands of items with the flag on them still for sale.

Johnna Hoff, a spokesperson for eBay, told CNN all items with images of the flag would be banned from the site because it has “become a contemporary symbol of divisiveness and racism.”

Debate over the placement of the Confederate flag on state grounds in South Carolina came to the forefront of national debate after a shooting last week left nine black people dead in a predominantly black church.

The confessed shooter, Dylann Roof, wrote a 2,400 word racist manifesto about his views on blacks, Jews, Hispanics and Asians, and said he wanted his act of mass murder to spark a race war in America.

“We have no skinheads, no real KKK, no one doing anything but talking on the internet. Well someone has to have the bravery to take it to the real world, and I guess that has to be me,” Roof wrote.

On Monday, Haley, surrounded at a press conference by other South Carolina officials, said the time had come to take down the flag, as it no longer had a place in the state’s future.

“This flag, while an integral part of our past, does not represent the future of our great state,” she said.