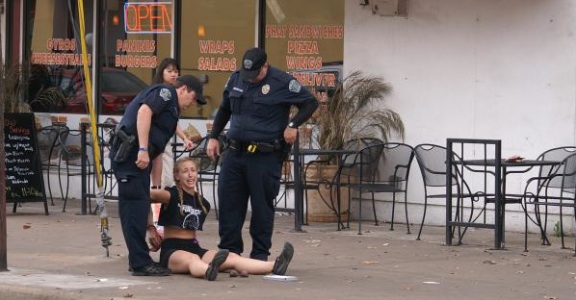 AUSTIN, TX–I’m normally a vocally proud Texan, much to the chagrin of my northern dwelling friends. However, after seeing this disturbing video go viral, I’m more aware that even a relatively free state like Texas can’t be spared from entitled police abusing their authority.

At the intersection of West 24th and San Antonio, an area of Austin that sees a lot of foot traffic, Amanda Stephen was innocently jogging while listening to her headphones. Austin Police allege that the woman disregarded traffic signals, and then arrested her for not providing identification.

Since February began, The Austin Police Department has been cracking down on jaywalkers after a new initiative was introduced to focus on traffic and pedestrian violations.

“This person absolutely took something that was as simple as “Austin Police – Stop!’ and decided to do everything you see on that video,” Austin Police Chief Art Acevedo at a press conference this afternoon. “And quite frankly she wasn’t charged with resisting. She’s lucky I wasn’t the arresting officer, because I wouldn’t have been as generous.”

Let’s just forget for a second that most people don’t jog with their ID’s. The official police account has some distinct differences from an eyewitness’ statements on the situation. Chris Quintero, the student who filmed the arrest, recalled the incident on his blog:

Suddenly, one of the cops shouts at an innocent girl jogging with her headphones on through West Campus. He wobbled after her and grabbed her by the arm. Startled, and not knowing it was a cop, she jerked her arm away. The cop viewed this as resisting arrest and proceeded to grab both arms tightly, placing her in handcuffs. She repeatedly pleaded with them saying that she was just exercising and to let her go. She repeatedly cried out, “I did not do anything wrong…just give me the ticket.” The other officer strolled over and now they were making a scene. She tried to get up. I doubt she was running away as she was in handcuffs, but the second cop pushed her back down to the ground.

The video spread like wildfire on the internet, and the majority of those commenting voiced their disapproval on how police handled this situation. Yet Acevedo continues to laud his department’s actions, saying, “In other cities there’s cops who are actually committing sexual assaults on duty, so I thank God that this is what passes for a controversy in Austin, Texas.”

Watch Amanda Stephen cry as she’s essentially kidnapped by police and dismiss it as “what passes for controversy.” This dismissive attitude of Chief Acevedo is indicative of how entitled police feel and refuse to be held accountable for their disturbing behavior.

UPDATE: The cause of arrest appears not to have been directly

Obama: “Wherever I can act on my own I will” (VIDEO)