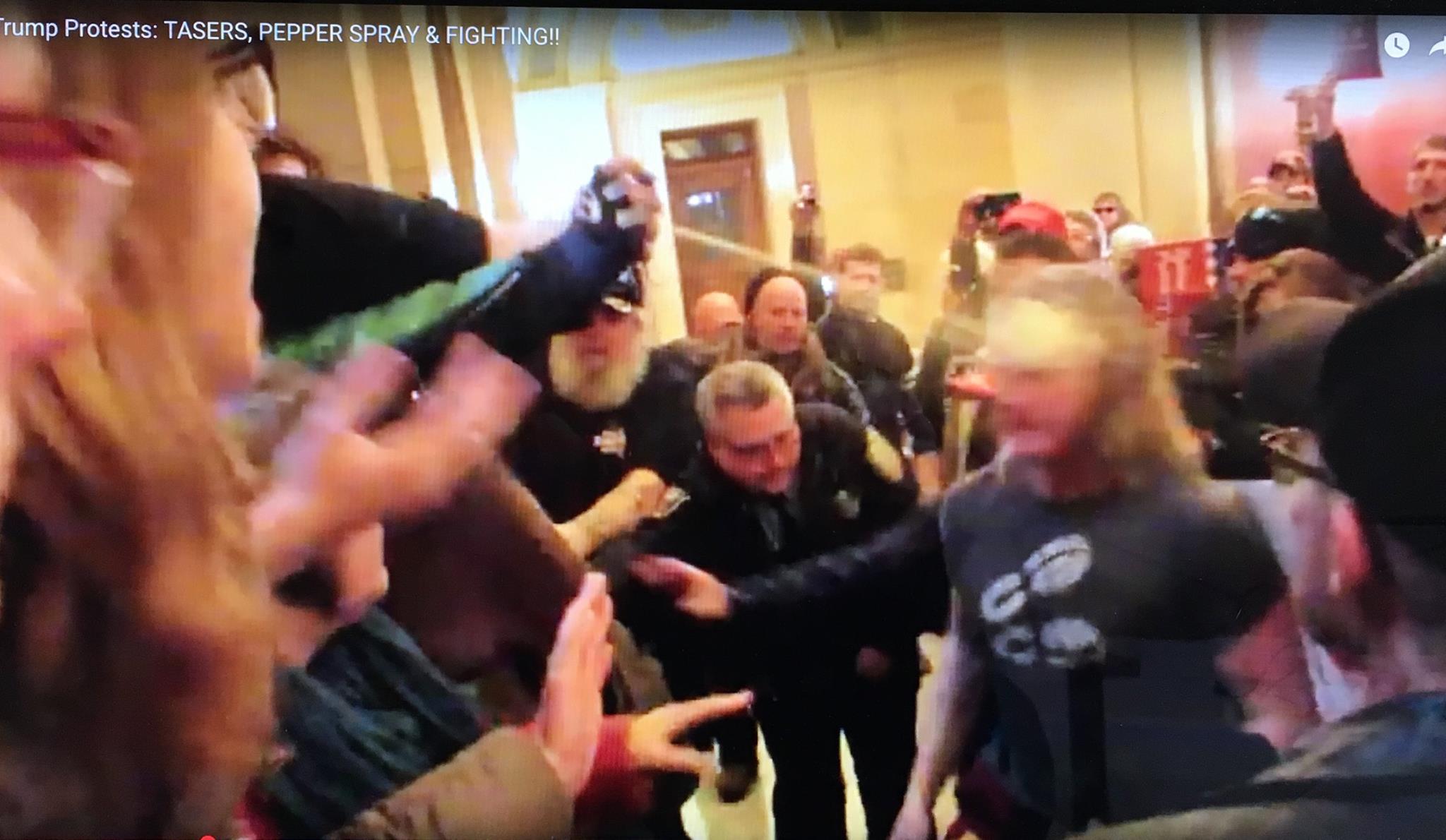 A St. Paul, Minnesota rally celebrating the success of President Trump’s first 100 days has been threatened by a group that includes an “ANTIFA” branch in its organization, AlphaNewsMN reported on May 5, 2017.

The M4T-USA group has organized another rally for Saturday, May 6, 2017 to be held at the Minnesota State Capitol at 11am (CT).  The organizers have planned for it to be a peaceful event, with Minnesota state legislators and other dignitaries scheduled to speak.  The intent of the rally is to engage Minnesota conservative voters for the upcoming 2018 elections when Democratic Governor Mark (“Crazy-Eyes”) Dayton is set to be replaced by a candidate many hope will be Republican.

On March 4, 2017 the “M4T-USA” group sponsored a pro-Trump rally in the Minnesota State Capitol that was besieged by anti-Trump protesters armed with tasers, mace and incendiary devices.  Six of the protesters were arrested; among those arrested was Democratic Vice Presidential candidate Tim Kaine’s son, Linwood “Woody” Kaine.  As of this time, none of those arrested have been charged.

Saturday’s rally has been hit with threats from the “Twin Cities Industrial Workers of the World General Defense Committee” (TwinCitiesGDC), who became enraged when an unsanctioned event invitation announced Simon Roche would be speaking at the event was posted on the M4T-USA Facebook page. (Roche, a white South African activist and leader of The Suidlanders, has been traveling the US, speaking about the situation in South Africa and his group’s fear of a possible civil war in their country.)

The event invitation was taken down as soon as possible, with M4T-USA organizers clarifying that the South African activist would not be at the rally.  The organizers’ efforts have fallen on deaf ears: the “counter-protest” by TwinCitiesGDC seems to be going on as planned.

The TwinCitiesGDC  proclaim on their website, “We cannot wait for oppressed groups not already a part of our union to raise these issues themselves, but must join with all oppressed groups in fighting against their oppressions,” do not understand the struggle of Roche and The Suidlanders in South Africa. The TwinCitiesGDC described Roche as a white supremacist and accused the Suidlanders of preparing for a race war in South Africa. The TwinCitiesGDC stated that Roche has come to the United States to rally the white community that has been devastated by new-liberal global capitalism.

The inflammatory statements made by the TwinCitiesGDC about Roche seem to be completely unfounded. In a March 29, 2017 interview with Danger & Play author, Mike Cernovich, Simon Roche detailed the atrocities being committed against people in South Africa.

In the interview, Roche tells Cernovich that the Suidlanders were formed under the rules of the Geneva Convention to prepare for a violent revolution after farmers were targeted and entire families were tortured, raped and murdered.  Roche goes on to explain that the Suidlanders fear that civil war is imminent and that white Christians are being targeted for extermination.. The Suidlanders have created an emergency plan to protect and care for “non-combatant civilian Africkaners that include women, children, the elderly and the non-able bodied likely to become victims in the event of a civil war.”

The Suidlanders’ fears seem to be well-founded: ZeroHedge reported in March the President of South Africa has been pressured by South African groups like the radical Economic Freedom Fighters, to redistribute land owned by the white minority.  The group, led by Julius Melema, has been traveling South Africa telling black South Africans ‘to take back land from white invaders and ‘Dutch thugs.’” In a March speech, South African President Zuma told parliament  “that his party (ANC) wanted to “unite black people in South Africa’ to expropriate land without compensation.” (ZeroHedge)

The Suidlanders also present voluminous evidence upon which their fears are based on its website, which along with Roche’s powerful interview with Cernovich begs the question: “Exactly where is the TwinCitiesGDC getting their information?”

It would seem that the TwinCitiesGDC doesn’t need facts in order to “protest,” harass or threaten peaceful Trump supporters.  The group proudly proclaims itself to be “anti-Capitalist” and anti-police.  They employ “working groups” that include an Anti-facism (Antifa) division, and are connected to the groups of black-clothed, masked rioters who were arrested in Washington DC during the Inauguration in January.

In August, then candidate Trump held a fundraiser in Minneapolis.  The private event was attacked by a mass of protesters who harassed and assaulted the attendees as they were entering and exiting the event.  A post from the TwinCitiesGDC website shows vandalism to the Minneapolis Convention Center where the fundraiser was held.  No arrests were made by police at that event; in fact, there were reports that police were told to stand down as the protesters attacked geriatric fundraiser attendees and surrounded Trump’s limo as he attempted to leave the event. (AlphaNews)

Videos taken at the March 4, 2017 rally show black-clothed, masked protesters spraying Trump supporters and police officers in the face with mace.  In an interview with AlphaNews, a 17 year old girl recounted her experience where she was punched in the face by an adult male. Though her family filed a police report, the man who assaulted her has not been caught or charged.

Saturday’s event organizers have been working with Capitol police and are assuring their group that security measures are in place to prevent another incident like the one that occurred in March.  The Minnesota Chapter of Bikers for Trump also plan to be there to provide an extra layer of security.

However, since the Minnesota law enforcement and justice agencies seem to be loathe to punish any protesters regardless of the violent nature of their crimes, it remains to be seen if today’s event is a peaceful one or if it degenerates into a brawl between ANTIFA and Trump supporters.