I’m 18 years old. I don’t know where I was on 9/11. It feels like I’m missing some central American experience, but it’s normal for someone my age. There’s still a piece of American history that I lived through I simply don’t remember. I’m present for the consequences of something that is, somehow, both during my lifetime and not. I was alive, but I cannot remember a time when 9/11 was not a reality of life.

People around me empathize with stories I can’t. The thing about life in a post-9/11 world is that I suspect it’s similar to being born in 1939. You remember, vaguely, the reality of World War Two, but Pearl Harbor, the “Date that will live in infamy” – that’s not real to you. So it is with 9/11. It’s been fifteen years since that day; five sixths of my life has been lived with American troops hunting terrorists in the Middle East.

That’s why it’s hard to know what to make of all the different views. I know people, old and young, who believe that George W. Bush did it. I know people, young and old, firmly in line with the mainstream. My life has contained more than enough jet fuel-related conversations for my taste. Even excluding conspiracy theories it is difficult to look objectively at what the government should have done after the attacks. Not a single 9/11 related conversation I’ve been involved in has avoided character attacks. Bush is a tyrant. The people are sheep. The War on Terror was just for oil interests.

It’s hard, too, because history so recent can’t really make sense. Too many variables cloud the view. Besides, even if we could get an objective opinion on whether or not the War on Terror was wise, its implications for modern foreign policy don’t change. It’s easy to pretend like somehow we have a right to shoot random people in the face because someone shot us first. But what’s harder is acknowledging America was overzealous in the early 2000’s and recognizing a complete withdrawal from the Middle East will backfire. It’s a common indictment of libertarians that we believe in total isolationism. This one doesn’t.

The quagmire that is international politics took a further darkening when planes flew into the Twin Towers. My perspective of that day lacks emotion in a way it can’t for anyone who lived through it. Is that a good thing? I don’t know. People lost their lives. That is saddening. It is not, however, personal for me. It can’t be.

I’ve learned to accept that. This article may be the first public admission I’ve made that I simply do not remember it.

I’ve heard it said, too, that the attacks on that day destroyed an idea of American security we had. After all, Pearl Harbor was the last real no-warning strike on Americans, but that wasn’t in the middle of a city. Pearl Harbor changed the world. So did 9/11. I’m always impressed to hear the stories of the heroes of that day; medical teams, firemen, random good Samaritans all working together in a crisis. Those stories are heartening. Fifteen years removed, that camaraderie is not present in the American people.

It is a sad reality that just fifteen years after such a tragedy a people once, briefly, so tightly bound could be so divided. We have two interventionist major Presidential candidates. It is clear that American meddling will likely continue far into the future and we will have to deal with the consequences of either Donald Trump or Hillary Clinton calling the shots for the next several years. Perhaps they learned the lessons of 9/11. Perhaps they didn’t.

My life has been lived in the shadow of 9/11. My perspective on everything has to take it into account. Others tell me I don’t understand. I know that. I can’t. As a three year old I doubt I had any idea what was going on, let alone that I needed to remember it. On this day, though, I think about all the stories I’ve heard. I’ve heard of heroism and tragedy and foolishness. I technically already forgot what it was like, but I can study, and I can learn the lessons it teaches. That’s all I can expect of anybody.

Commission On Presidential Debates And Margin Of Error 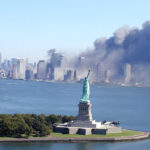