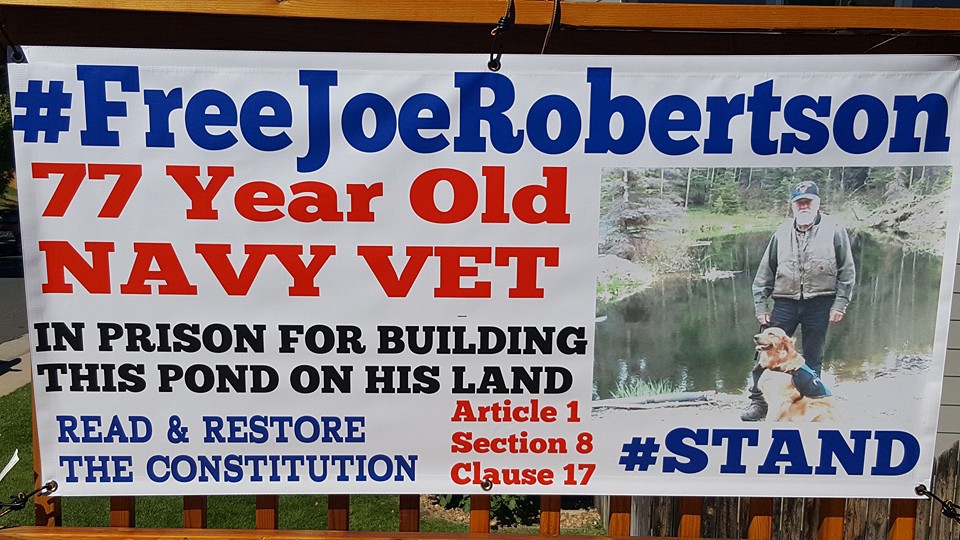 A 78-year-old man imprisoned for digging two ponds in Montana, one on federal land and the other on private property, without a permit has appealed his sentence, according to the Pacific Legal Foundation (PLF).

Robertson freely admits to digging the ponds, though he thought he was digging them both on private property when he began excavation. He takes issue with the federal government’s charge that his digging caused pollution in “waters of the U.S.” protected under the Clean Water Act. The nearest navigable river, the Jefferson, is 60 miles away, according to the Montana standard.

Robertson’s ponds “resulted in the discharge of dredged and fill material into a tributary stream and adjacent wetlands and caused widespread damage to both properties,” according to a 2016 Department of Justice (DOJ) press release.

“I don’t know how they say what happens up here can mean something all the way down there,” Robertson told the Montana Standard referring to the Jefferson River.

The Army Corps of Engineers and the Environmental Protection Agency claim the tributaries and wetlands around where Robertson built the ponds have a “significant nexus to traditional navigable waters,” so they should be protected as waters of the U.S.

“This verdict sends a message that the United States will not stand by and allow streams and wetlands of the United States to be polluted, or National Forest lands to be injured,” U.S. attorney Mike Cotter said in the DOJ press release. “Clean and healthy waterways are a critical resource for all forms of life and are a Montana value.”

Robertson and his supporters disagree that the wetlands around the ponds are a nexus and say the Clean Water Act’s definition of a “navigable water” is unconstitutionally vague and leads to violations of individuals property rights, according to the PLF.

“This is the government going too far,” local Montanan and Robertson’s friend Jim Buterbaugh told the Montana Standard. “He’s a mile away from the creek, so I don’t see where he’s going to be polluting since his ponds are groundwater ponds.”

Will Congress Pass A Medicare Expansion?