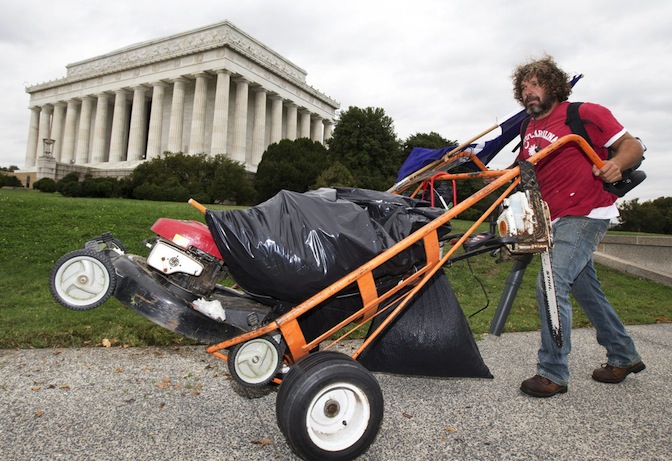 A man from South Carolina took it upon himself to mow the lawn at the Lincoln Memorial and in so doing, become a national hero.

CBS called him the “one-man militia”. He’s a man who was on a mission, and that mission was to keep the parks clean during the federal government’s shutdown. Chris Cox is the patriotic lawnmower who took up his flag of South Carolina and began to mow the lawn on Wednesday while carrying his state’s flag.

He was sadly shut down by Park Police when it was discovered he was doing a public service. But his gallant behavior did not go unnoticed!

South Carolina Representative Mark Sanford had some kind words for the hero from his home state, “Chris embodies what it means to be not just a South Carolinian, but an American,” said Sanford. “He saw a job that wasn’t getting done and decided to take care of it.”

Well done Chris Cox! Some people say that if we don’t have government doing something, that it can’t be done. You’ve just proved all of those people wrong with your simple act of kindness and charity.

GW students are in favor of Obamacare letting them stay on parent’s insurance forever! (VIDEO)