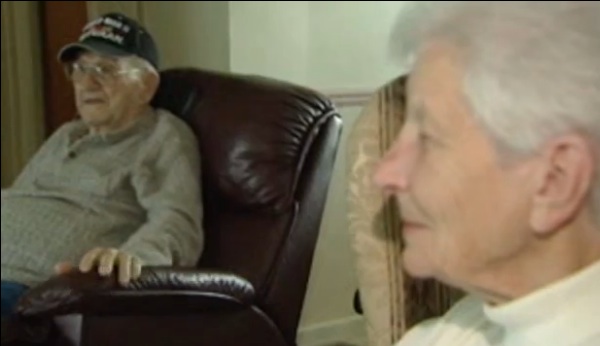 SPRINGFIELD OH– If Robert Kelly Jr. thought the elderly were easy targets, he was sorely mistaken. The 25-year-old had done odd jobs for 92-year-old Hugh Mathis and his wife Ruby, and talked his way into their home by asking to use their phone.

“I was so proud of him when he told me he was going to college. I thought that was great and let him come in and use the phone,” homeowner Ruby Mathis said.

What transpired next clearly went against Kelly’s plans. He pulled a knife on Hugh Mathis and attempted to rob him.

“He stuck the knife out there and said ‘Give me your money,’ and I said ‘You go to hell!’” Hugh Mathis said.

Ruby Mathis took swift action once she realized the severity of the situation.

“They were talking real low, and I came in to see what it was and when I did he was standing in front of Hugh with a knife saying, ‘Give me the money out of your pocket,’ so when I heard that I ran to the bedroom and got the gun,” Ruby Mathis said.

When Kelly saw that his would-be victims had no intention of complying with his demands, he tried to make a hasty exit.

“He ran out the door. I was getting up to get a club and then I was going to work him over real good,” Hugh Mathis said.

Kelly was taken into custody a short time later after police issued a warrant for his arrest.

“I learned a lesson. I won’t open the door again, I don’t care how much I think I know someone,” Ruby Mathis said.

Kelly’s bond was set at $1.5 million for three counts of aggravated robbery, and his case will go before a grand jury April 18.