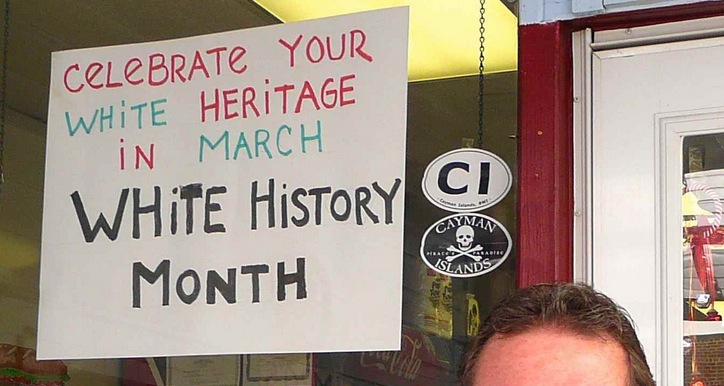 Jim Boggess of Flemington, New Jersey has caused an uproar after he posted a sign at his place of business which reads “Celebrate your white heritage in March, White History Month.”

Boggess remarked to NJ.com: “No matter what you are — Muslim, Jewish, black, white, gay, straight — you should be proud of what you are. I shouldn’t have to feel bad about being white.” [RELATED: School textbook says only white males can be racist]

The deli owner’s neighbors don’t feel the same way. Bhakti Curtis claims that the sign is making a mockery of Black History Month, and claims that the crossed T is indicative of the symbology of the KKK. [RELATED: We asked our readers to list white male privileges and boy did they deliver!]

The cross piece was not right at the top, it was lower down, in a style used by the Ku Klux Klan and other white-power groups, Curtis said. That cross piece of the T has since been broadened to make it a more traditional, if top-heavy, capital T.

On March 3, Curtis saw the sign, told Boggess it offended him, but got no satisfaction. So he filed a complaint with the Flemington police. Detective Sgt. William Svard said Cpl. Louis Hribik’s report indicates that Curtis said the sign is “racist,” that he felt harassed by it and wanted to know what would be done about it.

Hribik went to Jimbo’s, looked at the sign, spoke with Boggess and decided that the sign wasn’t derogatory or racist and that no further police action was needed.

Boggess agrees with that assessment and believes he’s lawfully exercising his right of free expression. He keeps a copy of the Bill of Rights in his establishment for ready reference.

He said reaction to the sign has been mixed. Lots of people have been photographing his sign with their phones and giving him a thumbs-up. But others have objected, including someone from the Business Improvement District who asked him to take it down, he said.

Another critic of the sign is John Puckett, owner of the Main Street Bagel Co. a couple doors away. He said the sign is “an embarrassment” to Flemington “and makes us look like a town full of inbreds.”

Boggess said, “If there’s any racial discrimination going on, it’s by people who are objecting to his sign “because I’m white.” He said that while other groups have their own celebrations, “I just want to be included. Why is this such a big deal? I don’t get it.”

He said, “I love everybody and everybody should celebrate what they are.”

But Curtis is not feeling the love. “A business can’t go putting racist signs in the window because everybody has a right to go in that store. Everybody! And have a right to buy something from that man and not feel demoralized or degraded.”

He said that racial parity has not yet been achieved, as evidenced, for example, by the recent shootings nationwide of unarmed black men by police.

Boggess plans to keep the sign up as long as he can, but admits that he’s under a lot of pressure to remove it.