Cancer Patient Gets IRS Audit After Complaining About Obamacare (VIDEO) 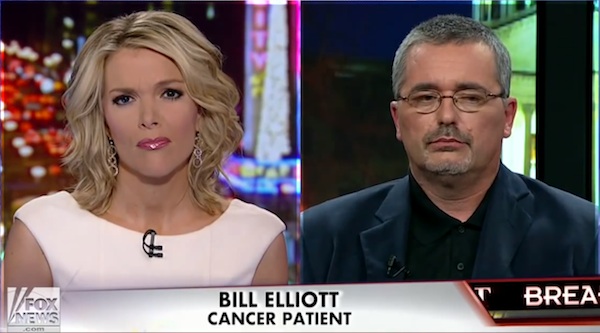 A cancer patient, who admittedly voted for the president, lost his coverage due to Obamacare, spoke up about it and is now being audited by the IRS. Bill Elliot initially lost his insurance due to Obamacare’s expensive new premium hikes. He was thinking about paying the fine and not having insurance to let “nature take its course.” [contextly_sidebar id=”fa88445319b4ac5d0525c1a74b0d7b73″]

Luckily, Elliot appeared on Fox News with Megyn Kelly in early November and was seen by a health insurance broker named C. Steven Tucker, who was able to help him keep his insurance. The two men wrote back and forth to one another about the happy news:

“Steve, the company decided to keep me active. Since it is a chronic illness. Until this illness kills me. Battle #1 is won. Now the hard part. You literally saved me. Thank you so much.” -Elliot

Those are the greatest words I have ever heard in my 20 year career as a licensed health insurance broker. I couldn’t be a happier man today! –Tucker

But then, in a very interesting coincidence of timing, Elliot and Tucker were both recently slapped with IRS audits. This is the same IRS that is in trouble after the political targeting of Tea Party groups.