The professor who joked about wanting “white genocide” for Christmas, recently complained that a man on an airplane had given up his seat to a soldier.

“Some guy gave up his first class seat for a uniformed soldier,” Drexel University professor George Ciccariello said on Twitter. “People are thanking him. I’m trying not to vomit or yell about Mosul.”

Some guy gave up his first class seat for a uniformed soldier. People are thanking him. I’m trying not to vomit or yell about Mosul.

Ciccariello was previously the subject of controversy when he tweeted that “all I want for Christmas is White Genocide.” (RELATED: University Professor: I Want ‘White Genocide’ For Christmas)

The associate professor of political science has previously made remarks such as “abolish the white race” and asserted that the slaughter of around 4,000 whites throughout the Haitian Revolution was a “good thing.” (RELATED: Drexel Professor Has A History Of Hating White People And Wishing For Their Genocide)

You tried not to vomit or yell?
No, you just sat there quietly like a little bitch.
Ignored, irrelevant, wishing you were a man.@ciccmaher

The Daily Caller News Foundation reached out to Ciccariello for comment, but received no response in time for publication. 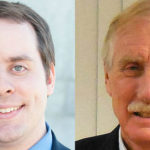 Liberty Ally on Brink of Challenging Sen. King in Maine