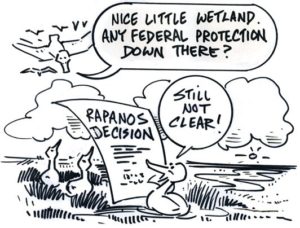 “Let’s start hiring those people, fellas,” Trump said before signing the order while surrounded by federal lawmakers and county officials.

Trump ordered federal agencies to make sure “waters are kept free from pollution, while at the same time promoting economic growth, minimizing regulatory uncertainty” and respecting the role of states and Congress.

Repealing parts of “Waters of the U.S.” (WOTUS) could take months or even years since the rule will have to go through the public comment period. The Environmental Protection Agency (EPA) and U.S. Army Corps of Engineers, which jointly administer WOTUS, will have to justify their findings with scientific research.

“And if the Trump Administration rescinds the existing WOTUS and promulgates a replacement, that action will be subject to a challenge in the courts,” Thaddeus Lightfoot, a partner at the law firm Dorsey & Whitney, said in an emailed statement.

A federal court blocked WOTUS in 2015 after 32 states sued to have the rule overturned. Lightfoot said Trump could use Congress to fully block WOTUS if the courts lift the stay on the rule.

“For example, if the courts lift the WOTUS rule stay or uphold the rule, the administration’s budget for EPA and the Corps could propose to withhold funds for implementation,” Lightfoot said.

But Trump may get help from Congress.

Using the CRA to repeal WOTUS would also prevent a federal agency from issuing a similar rule in the future. What’s unclear, however, is how Gibbs will justify his CRA given their are limits to what can be repealed.

EPA and the Corps finalized WOTUS in 2015, arguing it was necessary to clear up jurisdictional confusion in the wake of two U.S. Supreme Court cases.

Thirty-two states filed suit against EPA and the Corps to get federal judges to strike down the rule. EPA Administrator Scott Pruitt sued to have the rule overturned while attorney general of Oklahoma. A federal judge in North Dakota issued a stay against WOTUS in August 2015.

Republicans pointed to big problems with how WOTUS was crafted.

That “caused the career staff involved in developing the rule to feel pressure to meet accelerated timelines, which caused deficiencies in the regulatory process,” according to Chaffetz’s report.

This Is What An ISIS Drone Strike Looks Like [VIDEO]