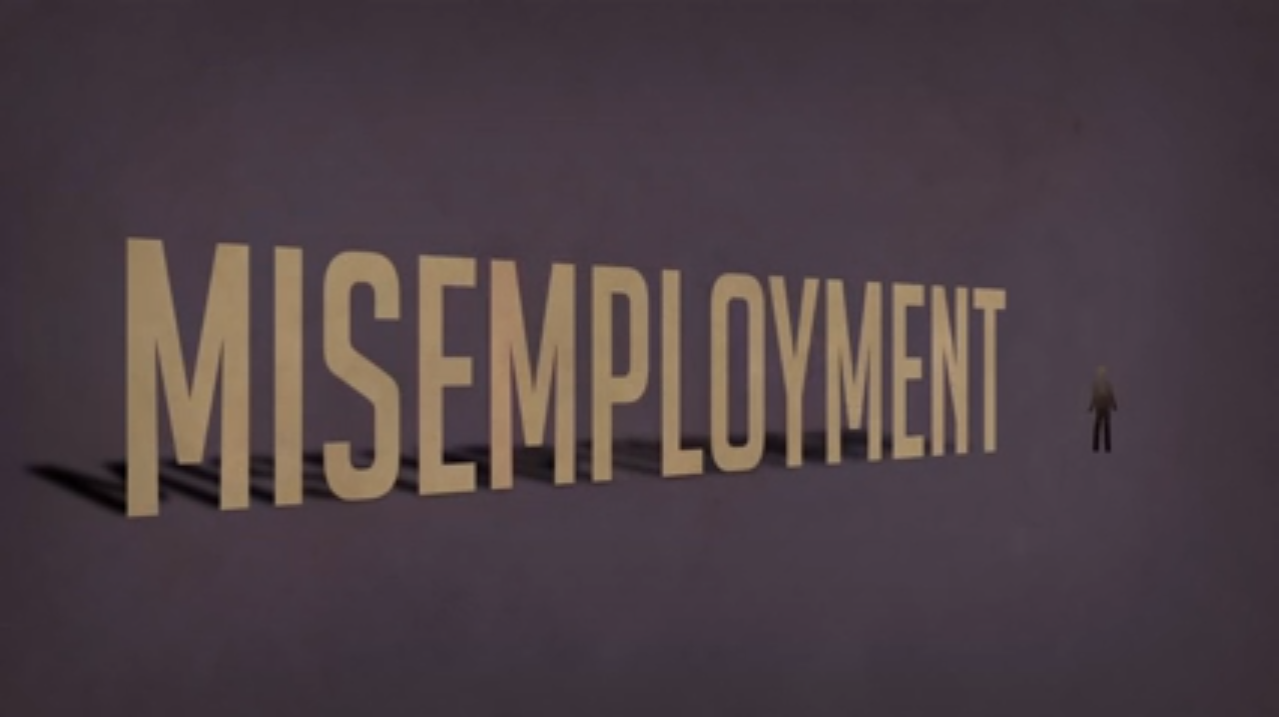 [dropcap size=small]I[/dropcap] came across an interesting video recently, produced by the website The Book of Life, titled “Misemployment.” In the video, a lot of postulations are made about the state of things, what priorities we should put within the job market, and what constitutes being truly for the good of our fellow man. The narrator (sporting a very intelligent-sounding accent for extra effect) claimed that The Book of Life had coined the “new” term misemployment. The etymology behind this word demonstrably proves that it’s been around for centuries or longer, however.

But never mind that – let’s indulge these self-important modern philosophers and go along with their belief that “misemployment” was their idea. What exactly do they mean by it? According to the video, misemployment is when someone is “in work, but of a kind that fails to tackle, with any real sincerity, the true needs of other people.” The short goes a step further by calling certain professions the perpetuators of “unsatisfactory desires and pleasures,” as if there isn’t something arbitrary about making such a distinction in the first place.

But we’ll get to that in a minute. For now, let’s just continue to go down the primrose path with the video makers and see where they are leading us. A specific hypothetical is presented: a man is hired by a casino to hold signs and call passersby indoors to indulge. The casino owner is presumably in need of more immediate advertising, and the sign man is likewise in need of a job. Win-win situation, right? Well, not according to The Book of Life producers. You see, according to them, one must be employed in a profession they deem worthy of furthering the human condition in order to not be misemployed.

How do they go about determining this? By making the claim that any misemployed job fails to contribute “to human welfare and flourishing.” In this specific example, the casino is accused of filling only a “small piece” of the puzzle that ultimately makes up society’s growth. But is that really true? The short answer is no. Casino money is what fuels much of Nevada’s economy (nearly 45%), and even in other states that aren’t as reliant on that specific industry for income, that revenue still pays for other things that everyday residents can benefit from. Take Connecticut for an example, where as much as 25% of casino profits go back to the state to pay for “nursing homes, schools and public safety programs,” as well as many other small but useful daily resources that go “back to the taxpayer.”

But of course, this isn’t the only instance where the video tries (and fails) to equate perfectly fine jobs with somehow failing to provide for the greater good. The entertainment industry (“addictive” television, according to the video), housing developers (“poorly designed condos”), and clothing providers (“shoddy and ill-fitting”) are all harshly judged and disparaged by the video as all having this same sin in common. Never mind the fact that people choose to watch television or indulge in unhealthy habits such as cigarettes and seem to really enjoy these activities. And forget the fact that fast fashion, its shady overseas labor record notwithstanding, still provides clothes that are not only stylish, but very affordable. And what about those condos? Is it honestly somehow contributing more to human well-being by not building those “shoddy” living spaces at all and leaving nothing affordable left for those who would otherwise have benefited from them?

Next, the video presents a “graph” that doesn’t really exist (revealed as such by not even following the rules of how an actual graph of collected data needs to be presented) trying to show just how high the “rate” of misemployment is – no citation of any kind, no context regarding what year or range of years this supposed data comes from. Just a statement that misemployment is “high.” Okay, then.

Another meaningless distinction is then made – good vs. bad demand. I’m sure such distinctions could make sense if properly contextualized or backed up by data, but unfortunately this is nowhere to be found. Just a drawing of a doctor standing next to the low-skill worker from earlier who was holding the sign. Do you want or even need to guess which of these two characters is considered part of the “good” employment camp by the video makers?

And here is where we get to the hypocrisy and arbitrariness of these distinctions I hinted at earlier in the article. No sooner are these aforementioned “bad” professions all cut down to size are we then introduced to The Book of Life‘s biased ideal of what a “real” job is – the white collar types. Doctors, professors, and other such positions that tell us “what really matters.” But what “really” matters to the producers at The Book of Life may not matter as much to someone else, and that other person shouldn’t be shamed or discouraged from pursuing what he finds meaningful just because it isn’t seen as quite as noble or profound by an uninvolved party. That person shouldn’t have to answer to them.

Look at it this way – even if I agree that higher-minded professions somehow mattered more than these apparently lowly jobs in the eyes of this video, I still need to drive my car to get from home to the workplace. I’ll also still desire time to unwind, rest my brain, and enjoy myself. Who else but these apparently “misemployed” people can assist me in this? Who else but the mechanic can make sure my car doesn’t break down on my way to work? Who else but the construction worker can make sure the infrastructure I drive on to get there is well-made? Who else but the sign guy can let me know where the casino is when I choose to go gamble? Who else but the misemployed ticket teller or concessions stand worker can get me set up for the movie I really want to go see? Who else but the sanitation worker is going to make sure my neighborhood’s streets are trash-free in the morning? Whether The Book of Life wants to admit it or not, there is honor in these jobs. And they are necessary. Perhaps the producers of this video have had the privilege of never having to really think about it much, and good for them, but nevertheless it is something that has to be thought about before any assumptions can be made about how much a job benefits human well-being or not. And first and foremost, human well-being starts with having access to a way of making a living.

Part of gaining that access involves understanding the process by which one can pull himself into working positions more aligned with his personal passions and expertise. The individual also has to prove himself a worthy contender for those positions by becoming more skilled or educated in the required field. Someone can’t simply jump from one profession to another without proper credentials, yet access to those credentials are easy enough to pursue. But it does take time, and no, not everyone gets to do exactly what they wanted to do from birth. That’s the natural result of a free market at work. But it doesn’t mean that anyone should be discouraged from shooting for the stars. In the meantime, however, what is sign guy supposed to do as long as he still lacks the credentials for the “better” job? Is he supposed to just stop being sign guy and go back on unemployment (presuming he can even get it)? Isn’t having a job of any kind still preferable to not having a job at all?

There is one line in particular from this video that I just loathe: “The real trick to bringing down misemployment isn’t just to stimulate demand, per say, but to stimulate the right sort of demand.”

What kind of an exclusive, fairy tale casuistry is that? Not only does this statement perpetuate the myth that misemployment by their definition is even a thing, much less a problem, but it offers a “solution” by dictating a very esoteric, ostracizing criterion for what we should actually be creating demand for. And here I thought demand came from human desire anyway, and that nobody can force someone into an action in a free society. Apparently I’m wrong, and the brilliant minds at The Book of Life have unlocked a deeper truth that is so outside the box it doesn’t even need data to back it up.

How fortunate it must be to have the privilege of being this simultaneously ignorant and judgmental.

Feds Hide Why Shrimp On A Treadmill Cost $1.3M