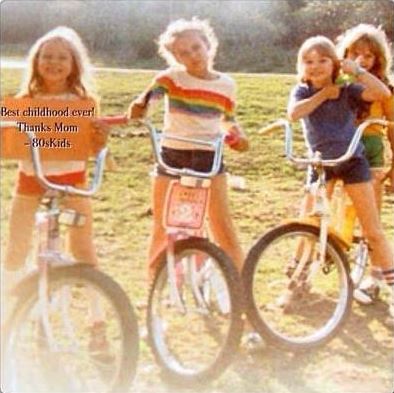 Despite the statistical facts that show that kids are much safer today, and FBI crime reports showing America is still getting safer, the 24-hour news cycle would have us parents believing otherwise.

Children experiencing the simple pleasures of playing freely while observing and interacting with the world around them have all been lost to the growing irrationality, that the children need to be protected from everything. They would have called us “Free-Range” children. In contrast to where “Helicopter Parenting” is more the norm, these hovering parental units are producing a bunch of whiney, self-entitled, needy, know-it-alls, who when push comes to shove, never learned how to resolve a conflict without their parents intervening.

Lighten up, parents. It was more dangerous back then-yes, it was-our parents only heard bad news at the five-o’clock and eleven-o’clock news segments. Today’s 24-hour news cycle has created a natural negativity bias and it’s time we recognize this and unplug, or at least use some common sense. We survived a helmet-free, carseat-free, hose-water drinking era. But most of all, we developed something you can sign your kid up for at the YMCA… common sense.

So, cut the cord, turn off of the T.V., and reminisce on some of the things we did as children that they can no longer enjoy in their innocence. With so much media hype on gun violence, all common sense has been thrown out the window. Children always played cops and robbers, used bows and arrows, and even sling shots as weapons to play with. Today, if a child so much as uses his fingers as a pretend gun, they are suspected of being cold-blooded killers.

There is a value to role-playing with props such as weapons, it would be a hard sell to someone who is anti-violence, but as one author writes, it’s O.K. for kids to play with toy guns, as it can help develop a fundamental sense of morality.

Will weapon play lead to violent character traits? The simple answer is no. Violent people typically display warning signs that include cruelty to animals, extreme isolation and rejection and a feeling of being persecuted and misunderstood. Pretend weapon play for kids brings the opposite. It’s social, cooperative and part of developing morality. Kids recognize weapons hold power, and they explore power and fears in their play. Instead of picking on play themes, our real job is to help kids cope with emotions and conflict.

If The War In Afghanistan Is Over, We Should Be Set Free, Gitmo Detainees Argue