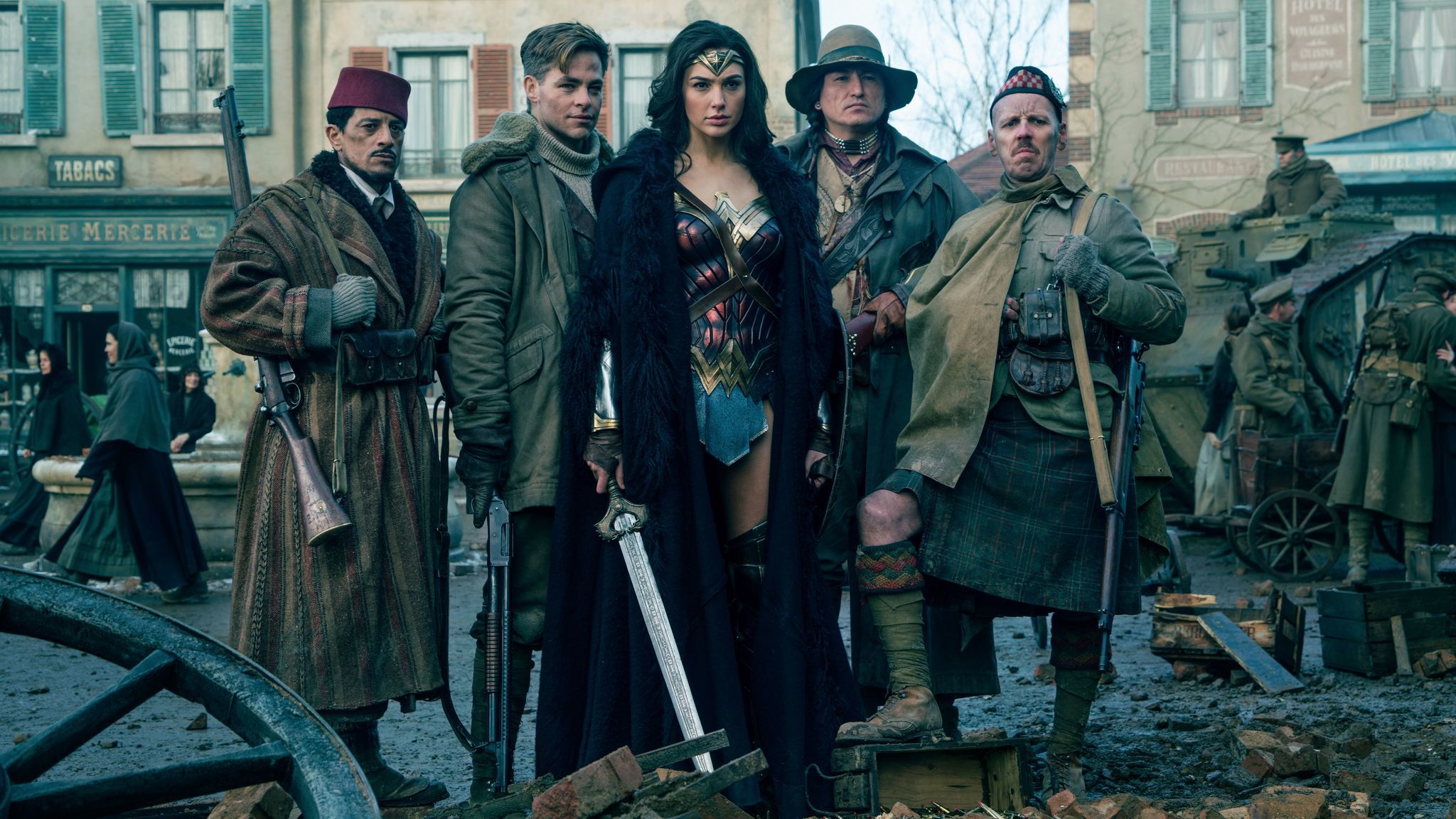 Superman isn’t brave…He’s smart, handsome, even decent. But he’s not brave. No, listen to me. Superman is indestructible, and you can’t be brave if you’re indestructible. It’s people like you and your mother. People who are different, and can be crushed and know it. Yet they keep on going out there every time. – Grandpa, ‘Angus’

“Wonder Woman” was going to do one of two things: It was going to play it safe, content to be a fairly conventional superhero movie with a few tropes being gender-swapped, or it was going to be a vicious and victorious triumph of female empowerment. After all, “Wonder Woman” takes place at the height of World War I, when women couldn’t vote, serve in the military, and hadn’t been elected to parliament.

Unfortunately, the movie was mostly the former.

But lets back up; Diana Prince (Gal Gadot) lives an idyllic life on Themyscira amongst the other Amazonians, training in combat, history, and learning the heavenly nature of their existence. After a sparring sessions results in her unleashing a power she didn’t know she had, a World War 1 plane crashes into the water just off the coast.

Diana dives in, saves the pilot, Steve Trevor (Chris Pine), fights off his pursuers in a thrilling action scene, and absconds with Trevor to stop the ‘war to end all wars’; with Diana believing the war is entirely the doing of Ares, the God of war.

From there we get some ‘Thor’sian fish out of water humor as Diana becomes acclimated to this new, male dominated world. Eventually her, Trevor, and a gang of multicultural mercenaries set off on an adventure, Diana to confront Ares, with the rest of the gang angling to destroy a powerful nerve gas that will kill anyone it comes in contact with. Regardless of whether or not you’re wearing a gas-mask.

The chemistry between Diana and Trevor is good during this setup, with Trevor trying to reign in the Amazonian princess’ intense curiosity and independence, all the while attempting to ‘protect’ her and not quite getting the hint she doesn’t need – or want, protection.

The film’s defining action sequence comes as Diana sheds her mortal trappings, ascending from the trenches in slow motion, unveiling the Wonder Woman armor, sword, and shield hiding under her coat, marching across a deadlocked area known as ‘no man’s land’, and taking out entire platoons of enemy soldiers as the music swells- eventually her allies support her and they win the day. It’s an iconic scene, and the audience’s eyes got just a little misty…mine included.

Not since Lucy has a female protagonist been so badass.

This scene takes place within a relatively conventional story, which is comfortable to paint within the margins, but as is the case with most superhero movies, the joy comes down to how the movie works within these margins to entertain in new and unique ways. In that regard the movie adds up to a decent whole that’s heavy on humor, fairly weak CGI, and a couple of quality ponderings on why good people do bad things.

But at the risk of alienating both feminists and the liberty-minded audience that keeps the lights on around here, I think the movie played it far too safe regarding politics.

In the same way “The Dark Knight” was an allegory for the war on terror; in essence supporting domestic surveillance in the face of a threat that doesn’t play by the rules, I wanted similarly damning evidence and lancing truth about the capacity of men to do bad things, and more importantly why, in the face of mankind’s daily emotional terrorism, Diana would think we’re still worth fighting for.

I wanted the case against all things man. Instead you get to see Chris Pine’s coin purse.

And I understand it is the height of hubris and masochistic misogyny to ask a movie called Wonder Woman be about men. But I feel there was an opportunity here, in the midsts of a brutal world war, for a condemnation and defense of mankind in an egalitarian way by a woman with an outside perspective.

The movie played it safe, and I think it did it for two reasons. First, because there was going to be enough politics surrounding this movie as it is, and making the move itself distinctly political might sour the masses or backfire.

Second, Feminism and Female empowerment isn’t the film’s subject. The movie isn’t about feminism or female empowerment at all. It’s about innocence; the notion that at some point in our lives, our worldview crumbles in front of our eyes and it’s up to us to pick up the pieces else wallow in nihilist misery for the rest of our lives.

This is Diana’s arc. From innocent to combatant to cynic to…something else.

There’s also the issue that because Diana is an alien to western civilization, she can’t directly combat the institutions of sexism and patriarchy because she hasn’t lived a lifetime being exposed to them. She’s not outraged at being excluded from a male-only meeting of generals, she’s confused. Men continually fawn at her and she smiles and nods and doesn’t rebuke them powerfully because this stuff hasn’t become so frequent as to be maddening.

She tackles everything with a shrug instead of a fury. Speaking strictly socially, she’s a deer in the head lights when just about every piece of media written about this movie wants and needs her to be a fearless girl standing in the face of a raging bull of male dominated society.

Lip service is paid; she throws a guy across the bar who speaks uncouthly. She stands up to Trevor regarding the meeting with the generals, another character speaks matter-of-factly about how Americans took Native Americans’ land and resources, an actor can’t follow his dream because he’s ‘the wrong color’.

But these are all questioning why things are the way they are, but never really calling bullshit in a powerful and film-defining way. This movie’s lasso of truth never fully unfurls enough to tackle these issues head on.

It’s also worth noting Wonder Woman is basically indestructible. She can do literally anything she wants, confident in the knowledge she could crush you like a bug, which could explain why she doesn’t take any of the sexism she faces particularly seriously.

It’s easy to be brave in the face of victory, doing so with your mortality in mind is a different story.

But then again, I don’t think it matters. As a kid I didn’t need to know Roger Ebert was a good movie critic in order to look up to him. Just seeing a rotund guy on television was enough to give me hope. Jackie Robinson didn’t need to be one of the greats. He just needed to play.

And Wonder Woman doesn’t need to be capital F “Feminist” or be Oscar worthy to inspire folks. It needs to be good and exciting and fun and even if it shouldn’t have to, prove ‘girls can do it too’. In that regard, Wonder Woman is a smashing success.

The film itself is conventional as all get out, but the risk, the challenge, the victory for women, comes from behind the scenes; merchandising and ticket sales and second weekends and sequels.

Look, folks have admitted the movie’s flaws and happily given it a pass, which they, and audiences, are completely welcome to do. There are memes about how The Princess Bride has become a General. How it never fetishizes Gal Gadot’s beauty. How it lets her thighs jiggle. Innumerable details and elements of the film are being celebrated by an audience who have been waiting – in some cases for their entire lives – for a super heroine like Wonder Woman to be taken seriously on the big screen, and are picking up on things that men probably never would.

The people wanted it, and they got it. The free market, as it were. Thus, on the Libertarian Republic Rating System, on scale of Margaret Sanger to Marianne Copeland, Wonder Woman gets a Constance Markievicz.

Wonder Woman the ‘event’ is more important than Wonder Woman the movie. So maybe this movie, with its mediocre theme and mediocre CGI is enough to break through the glass ceiling; and we’ll see stronger movies with female heroes like Squirrel girl and Mz. marvel and Black Widow and Elektra and Black Cat.

Goddess, we can hope.
——-
EDITOR’s NOTE: The views expressed are those of the author, they are not necessarily representative of The Libertarian Republic or its sponsors.

ISIS Strikes Iran For The First Time Ever

HFC Calls For Congressmen To Work Like Every Other American