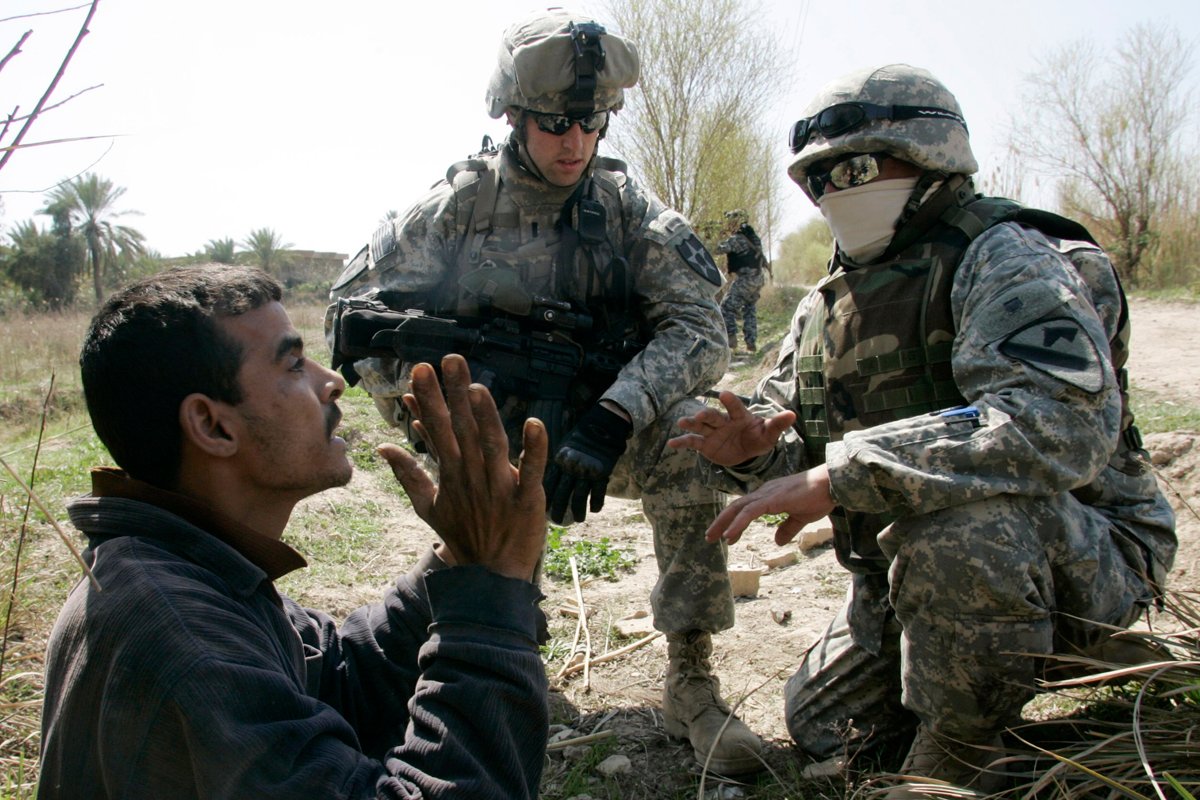 Thousands of interpreters risked their lives working on behalf of the United States during the wars in Iraq and Afghanistan. While most of the U.S. military personnel who fought in those conflicts have now returned home, a majority of their interpreters remain in-country and their lives are in as much danger now as they were before.

One such interpreter desperate for help contacted The Daily Caller News Foundation.

“Please, I want your help, I am [an] Iraqi interpreter,” read the subject line of the first email received by TheDCNF.

After corresponding with Mahbeer, TheDCNF was not only able to verify his identity, but it also became clear that Mahbeer was awarded commendations and certificates for his position as an integral part within the Army’s 1st Cavalry Division.

The email, and subsequent exchanges, told a dire and intricately detailed story. Mahbeer, a pseudonym assigned to the interpreter to protect his true identity, explained how he worked for the U.S. Army for five years as an interpreter. He provided remarkable details as to the nature of his employment, his documentation proving his identity, pictures of him and the unit he worked with and even pictures proving the identity of his family. Mahbeer was not the only one in danger: His wife and two young children, a boy and a girl, were also under threat from those in Iraq who hunt down anyone who worked with the U.S. military.

“I was working with U.S. forces as interpreter … I want or I hope … to get immigration to [the] U.S.A.,” said Mahbeer in his email. “I started working with U.S. forces from 2006 to 2011 …  I have all the paperwork to prove I was [working] and support[ing] U.S. Army ween (sic) they [were] in Iraq. Now, as you know, the security situation in Iraq is very dangerous for my life and the life of [my] family. I got threat [sic] by bad people. I have two kids and my wife.”

“Your hard work and dedication greatly increased our standard of living and … morale. As a result of your support [the unit] performed its mission flawlessly,” said Mahbeer’s Army commendation. A second certificate of appreciation hailed Mahbeer’s “generosity” and “dedication to our soldiers, their families and the nation in this time of war.”

Unfortunately, commendations and certificates would not protect Mahbeer.

“Now terrorism everywhere in my country, militias and Daesh [ISIS],” he explained. “And they hate all the people [who worked] with the U.S. Army … some are calling me … a spy and I got a [threatened] because I [supported] the U.S. Army … I was working with the U.S. military in order for freedom.”

He went on to say how he became involved with the Army during the occupation. He was discovered by an Army unit after he revealed he spoke decent English — a rare find at the time when interpreters were hard to come by. When asked if he would like to work for the Army, his response was simple: “gladly, sir.” Mahbeer ended up working side-by-side with U.S. forces for five years until the U.S. withdrawal in 2011.

“What is happening in Iraq is a bad thing in all areas: security, economy, etc.,” Mahbeer told TheDCNF. As bad as life is for many Iraqis, he noted that it is especially bad for those who worked with the U.S. “We are afraid of everything: armed militias backed by Iran on our streets, without fear of the government, on the pretext that they are protecting Iraq and at the same time they are a serial killer[s].”

Mahbeer is from a town east of the Iraqi capital of Baghdad, which he says is essentially controlled by Iranian-backed Shia Popular Mobilization Units (PMUs). Many of the Shia militants fighting in the PMUs also fought U.S. soldiers during the occupation, and they disdain anyone who collaborated with the U.S. Mahbeer said his life was first threatened through an anonymous letter warning his death.

“The problem is that I can not to tell the police because most of them working [are] for the militias, and now I do not know what to do,” he explained in a later email.

“I trust you,” read a second message shortly after.

Mahbeer said he knows many interpreters who have been harassed and killed for their work with the U.S. One example he provided was that of a young man who was killed four months ago. He left his house one day never to return — his body was later discovered. The man’s father reportedly died of grief shortly after.

Cases like those of Mahbeer are all too common. In an attempt to rectify the situation, the U.S. government created what is called the Special Immigrant Visa (SIV) program, which would allow interpreters whose lives were under threat for their work to immigrate to the U.S. Unfortunately, the bureaucratic complexity of the program has caused some interpreters to be lost in the system. TheDCNF originally reported on this issue in February.

Mahbeer’s case is similar. In order to successfully receive a visa in the SIV program, an interpreter must prove that they worked for the U.S. for two years, obtain a letter of recommendation from the military commander of the unit they worked for and receive a letter written on their behalf from their employer.

Obtaining a letter from employers is often the hardest step in the process for former interpreters.

“Multiple contractors held these contracts throughout the war,” explained Matt Zeller, a former Army officer who now runs No One Left Behind, a non-profit dedicated to helping save former interpreters.

To make matters worse, many contractors, such as Mahbeer’s, simply closed up shop in Iraq and Afghanistan after the wars concluded. Mahbeer had a glowing recommendation from his unit’s commander.

“I would be very proud to call [Mahbeer] my fellow American, due to his enduring loyalty that he already has to a country he is not a part of, but wishes to be,” wrote the commander, who personally vouched that Mahbeer would not present a security concern to the U.S.

Unfortunately for Mahbeer, even the highest praise from a senior U.S. military officer is not enough to break through bureaucratic red tape.

Mahbeer explained to TheDCNF that he had been attempting to secure a letter from his former employer, Global Linguist Solutions (GLS), for some time, but to no avail. Without the letter, there was no way Mahbeer would be able to save himself, his wife, or his two young children.

After GLS failed to respond to an email from TheDCNF on Mahbeer’s behalf, contact with the company was eventually established through a phone call. An email from Mahbeer two days later confirmed he had received his letter from GLS confirming his employment.

GLS did not provide a response to TheDCNF’s request for comment.

Though the letter is a crucial step in ensuring the safety of Mahbeer and his family, they are not out of danger yet. Applications for the SIV program were due September 30, 2014. He is no longer eligible for the program because he was unable to complete his package.

Fortunately, alternative options do exist. The International Organization for Migration (IOM) has a program that helps Iraqi interpreters who are under threat. But like the SIV program, IOM also required a letter of recommendation from Mahbeer’s employer. Now that he has secured that letter, he should be able to complete his application and eventually migrate to the U.S.

“Hundreds of translators face the same problem,” said Mahbeer in an email to TheDCNF after he received his letter. Though he expressed his happiness over receiving the long awaited final piece to his application, he noted it took as long as two years before some interpreters were finally able to come to the U.S. after applying.

Mahbeer’s fight is far from over, but he and his family are one step closer to safety than those who are not as fortunate. His case may be just one of thousands.

GOP Congressman: IRS Too Busy Spying On Americans To Do Its Job

College Prof: I Can’t Write Recommendations For People Who Like Guns