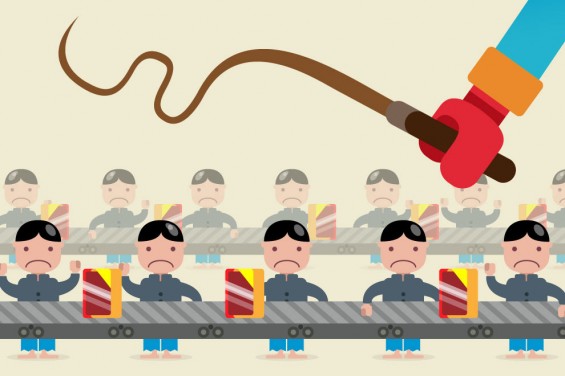 [dropcap size=small]W[/dropcap]hat is communism? If one were to ask for the modern, hipster definition of it, the response would be, as comedian Russell Brand said, “sharing.” The problem with this explanation is that it is not only oversimplified, but also historically revisionist in its presentation. For in order to ensure that this “sharing” takes place fairly and evenly, a certain amount of government enforcement is required. Taken to extremes (as communism almost always has been throughout history), we get the body counts of Che Guevara, Fidel Castro, Stalin, Lenin, etc. as a painful reminder that not all good ideas are executable without force, and when force is opposed upon people, revolt and bloodshed always follows sooner or later.

One prominent communism-infused government still remains today, however, and is argued by the communist apologists to be the best modern example of how socialist, government-enforced policies really do ‘work.’ That government is the wrongly named People’s Republic of China (PRC).

Leaving aside for a moment the simple fact that we can point to multiple instances throughout history (including in China, by the way) where communism’s implementation led to millions of deaths, economic collapse, and an overall stymied quality of life and liberty for citizens, let’s humor the PRC promulgators long enough to examine what is really going on.

So, to lay the groundwork for the argument we’re going to make, we first need to explain what it was that led to the economic boom in the western world (primarily Europe and North America) we all still reap benefits from today. In order to do that, we need to examine what difference was truly made before and after this shift. It happened in the 1800s, and as economist Deirdre McCloskey puts it, back then the average person was making “the modern equivalent of $3 a day (adjusted for inflation).” McCloskey sends this point home by illustrating this amount isn’t even enough to purchase a full cappuccino. “In the last thirty years,” she continues, “the percentage of people who are that badly off … has fallen by half.” This is just the most recent positive development in an ongoing upstroke that McCloskey refers to as “the blade of the hockey stick” when viewed as a graphed measurement on the charts. And the broader picture is that over the past two centuries, our average daily income has risen from that initial $3 a day (which had been a constant for centuries) to $130 a day. That’s incredibly fast, incredibly big change.

McCloskey explains that this spike in wealth was kicked off in a big way by industry (obviously), and innovation, competition, etc. that we all should recognize as among the driving factors behind the Industrial Revolution. But this wouldn’t have even been possible, according to McCloskey, had it not been for “two big changes” in both Holland and England in the Seventeenth and Eighteenth Centuries – where economic freedom and “social honor” for traders, merchants, and what by modern standards can only be defined as the entrepreneur was applied in society.

This phenomenon was not unheard of before. In fact, the artisan class of peoples back in Ancient Egypt also went through a similar transformation. Initially, their work was taken for granted and their social status limited. But then, as we can see by the evolution of the hieroglyphs and artistic renderings throughout Egypt’s history, the artisans started being recorded and given public recognition. In Europe during the 1700s, we merely see the next societal step along that same path. And the results, highlighted by McCloskey, speak for themselves.

What does all of this have to do with China? Well, the communist apologists like to point to China’s economic boom in the 1970s as proof that the modern state of things in that country, communism and all, is not only sustainable but successful. This is false; because much like the Egyptians with their artisans, the Greeks and Romans with their philosophers, the Europeans with their craftsman and tradesman, and America with our technological entrepreneurs, China also went through its own period of economic freedom. And that is what grew China’s wealth, not communism.

The year was 1978, and the modern communists like to credit that to the Chine Communist Party (CCP) members (who were in office at the time) by being good state planners. However, as we’ve already seen countless times before, officiated communism leads one way – to destruction.

Instead, there is a much more logical explanation for “China’s economic miracle” – as the Victims of Communism Foundation’s M. Nolan Gray outlines in his piece, “China’s First Capitalists” – and that is that once again, economic growth did it. This time, through farmers. As Gray postulates, “The greatest error [by commentators]… has been ignoring the central insight that spurred China’s rapid growth in the first place: that economic liberty creates prosperity. China’s economic miracle didn’t begin with state planners …, but with dissident farmers in an impoverished village.”

Gray’s full analysis is below:

“In 1978, a group of farmers decided they had had enough of the poverty caused by Mao Zedong’s disastrous Great Leap Forward. Secretly meeting in a farmhouse, the farmers engaged in a revolutionary act of institutional innovation: they divided up the collective farm among the member families, and allowed each to keep what they produced once the CCP quotas were met, enshrining the new system in a written document. By establishing modest protections for property rights, they became, as NPR’s Planet Money puts it, “the first capitalists in modern China.”

What were the results? Encouraged by the possibility of keeping the fruits of their labor and a healthy sense of competition, the farmers’ productivity dramatically increased. Once the victim of communist-induced famine, they enjoyed prosperity for the first time in decades. More food was produced in one year than in the past five years combined. Reformers interested in moving away from Mao’s dystopia, including Deng Xiaoping, noticed the village’s success and ultimately abandoned collectivized farming.

The decollectivization of agriculture set off a wave of reforms enhancing the economic liberty of the Chinese people. Market prices allowed efficient ground-up markets to develop in place of inefficient top-down plans. Many state-owned industries were privatized, and entrepreneurs were permitted to start businesses. Although the state and party leaders maintained their oligarchical status by preserving certain state-owned enterprises, a flourishing private sector enabled 500 million Chinese citizens to pull themselves out of poverty. The bottom-up, market-driven miracle of the post-1978 era stands in stark contrast to the top-down, communist controlled nightmare of the 50s and 60s.”

Why is this debate even happening again, at the moment? Well, because just this past year there was something of a ‘crash’ due to a surge in state-pushed incentives to try and grow the market more. If government regulation and dictation in the affairs of markets and social planning were really as successful as the communism fans claim they are, one would have expected the results to be different. And yet, the analysts taking a look at what caused the now infamous “Black Monday” of August 24th, 2015 have missed the fact that their answer is staring them directly in the face – China’s economic success itself held the key, because its origins were found not in the state-sponsored planning of the CCP, but instead in the minds and actions of the real movers of the economy – the laborers who, if their economic surroundings allow for it, can truly turn rust into gold.

Looking to the future, then, should China stick to its baseless confidence in the way it’s currently running things? Or should it go back to its own history and pull some lessons from those capitalists who saved it before? Only time will tell which direction it chooses to go in – and which one was right.