Just when you thought the state of California had hit the apex of insanity, managing to barely pass a monstrous $52 billion regressive fuel tax, and utilizing a supermajority of Democrats in the “Golden State” government, KTLA5 busted the doors down on what inched the fleecing of taxpayers over the finish line. (RELATED: California Prepares To Enact The Highest Gas Tax In The Country)

From The Libertarian Republic:

The so-called Road Repair and Accountability Act would ratchet up the state’s gas tax by 12 cents a gallon, and raise the tax on diesel fuel by 20 cents a gallon. It also etches out an additional charge to annual vehicle license fees ranging from $25 to $175 depending on the car’s value.

The gas tax required a two-thirds vote in each chamber to pass.

THE PORK AND DECEIT

According to a report from KTLA5, Governor Jerry Brown needed roughly $1 BILLION for the pet projects of lawmakers who had been sitting on the fence before they were persuaded to vote for the bill.

Brown’s promises to a few legislators’ districts just to ensure his gas tax got enough votes to pass both the Senate and Assembly on Thursday night. One Republican legislator got $500 million in projects for his district alone. Oh, and remember, that’s your money Brown is trading for votes.

Governor Brown, who refers to the cash peddling to his fellow Democrats and 1 Republican as funding “arrangements,” called the passing of the bill, known as the Road Repair and Accountability Act, “a hell of a good deal.“

Some legislators said the horse-trading taints the legislative process, but Brown defended the deals as justified, a moderate investment compared with the payoff of a bill that will generate $5.2 billion annually in the first 10 years for road repairs, and billions more in future years, reported KTLA5.

“I don’t think I’ve ever seen anything as big as this particular transportation bill,” Brown told reporters after the vote, according to the LA Times. “So I would say some of the arrangements that were entailed in this process, they may look large, but relative to $52 billion, it’s all pretty modest.”

Assembly Republican leader Chad Mayes of Yucca Valley criticized the bill, stating, “Democrats just gave us the largest gas tax increase in state history — a deal so bad they needed $1 billion in pork to buy the votes to pass it. California deserves better,” according to the Times.

Now all of this is expected out of the Democrats in the California legislature, with no need to work with Republicans to pass law due to their supermajority control of Sacramento, but party lines did not hold true in this vote. As mentioned above, one soul-less Republican became the recipient of the largest handout from Brown, and effectively the swing vote for the fuel tax.

See, St. Senator Anthony Canella’s (Ceres) vote was so important, because one Democrat had the wherewithal to stop the unsealable faucet that has become the California taxpayers’ wallets. 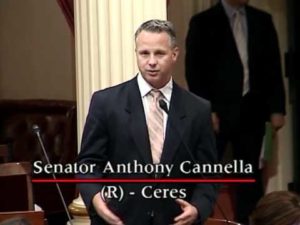 Canella’s vote was crucial, because moderate State Sen. Steve Glazer (D-Orinda) opposed the gas tax, explaining in a statement published by the East Bay Times that it was unnecessary to raise taxes rather than redirecting spending from the costly high-speed rail project.

Canella, in his duplicitous slap to the face of his constituents, received nearly half of the money spent to sway votes.

That side deal turns out to have been the costliest of all, amounting to $400 million in pork for “the extension of the Altamont Corridor Express, a commuter rail line between the Bay Area and Central Valley.”

Canella, without remorse, went on to tell the LA Times, “I got the things I asked for, so apparently I made the most compelling case.”

Apparently social media has not been too friendly to the turncoat St. Senator, as he tweeted that he was taking a hiatus from his accounts.

I think I’m going to stay off social media today…

Here are some of the responses to his account:

You don't need to stay off of social media. You just either need to resign or declare yourself a Democrat.

You voted yes to raise taxes? As soon as I retire, I'm leaving CA. You'll have to nickel-&-dime residents into penury without me. GFY

@AnthonyCannella You work for us and your not even listening to your own constituents who don’t want this tax!!!

Oh great!
Higher "gas tax" to siphon into the general fund so unbridled state spending can continue
I object to rampant waste of MY tax $$$

Popular Southern California radio show hosts John Kobylt and Ken Chiampou have speculated about Canella’s background as a civil engineer. They question if, since he will be termed out following his current term, his motivation was to lace his pockets prior to leaving his seat.

When is enough enough in California?

As the old adage goes, “eventually you run out of other people’s money.”