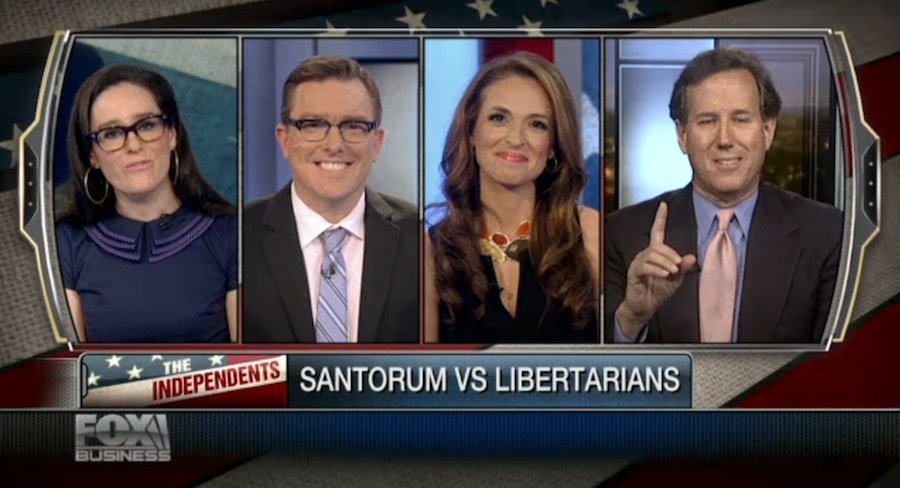 The Independents show on Fox Business hosted former Senator Rick Santorum to discuss his new book “Blue Collar Conservatives.” But what was supposed to be a book promotional segment seemed more likely to be a thinly veiled opportunity for the libertarian hosts to skewer Santorum over his opposition to libertarianism.

Hostess with the Mostess Kennedy made a bee-line for contentious issues such as abortion, gay marriage and the Senator’s fight against libertarians in the Republican Party. Calling him a “big government social conservative,” Kennedy said she was afraid of the ideas that the senator proposes regarding the involvement of “government in our bedrooms.” She referred to his statement about a rising tide lifting all boats in society, asking him specifically about the view that society can’t progress if one of the boats has a hole. “Are you going to use the government to plug my hole?” she asked.

Santorum dismissed her concerns, claiming that libertarian ideas can’t work in the real world and criticized the idea of the right to happiness. The Pennsylvania senator claimed to have the moral authority on “true happiness,” believing that happiness isn’t being able to do whatever you want to do.

Kennedy slapped him down, arguing that he likely has a slim chance of winning the presidency when young people are widely embracing libertarian views with aplomb.

Watch this epic 10 minute smackdown as Kennedy brutalizes Santorum with her razor-sharp wit and principled approach to ethics and morality concerning the role of government in our lives.

Can A Man Strike A Woman In Self Defense? Jay Z v. Solange (PODCAST)