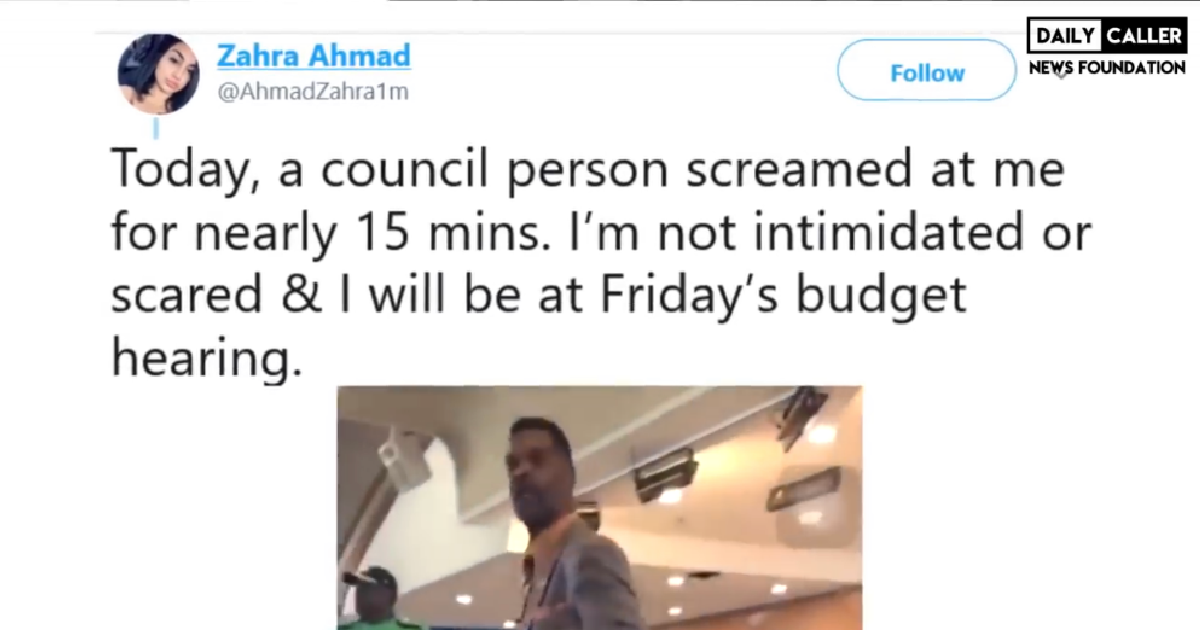 Mays previously pleaded guilty to felonious assault and has been sentenced to jail and community service as part of other plea deals.

Mayor Karen Weaver has instructed her staff not to talk to media, despite the numerous significant scandals Flint has faced, according to a councilwoman.

A felon-turned-city councilman in Flint, Michigan, berated a young reporter in the council chambers, calling her “nasty” and repeatedly saying she was ignorant.

Mays also threatened to call the police on Ahmad.

Ahmad is one of the only print reporters to cover the impoverished city’s government, but Mayor Karen Weaver has prohibited her administration from speaking to journalists, according to one elected official.

“The mayor has told her staff not to talk to any media,” Councilwoman Eva Worthing told The Daily Caller News Foundation. “They use Facebook Live, she’ll go on radio to get her message across, where it’s her own broadcast. Employees are not allowed to talk to the media. There’s a lot of corruption with this administration, so they don’t want to be transparent.”

The mayor’s office would not provide TheDCNF with any examples of the administration granting interviews to MLive since May 2018.

Meanwhile, $100 million of federal money intended to address the water crisis has flowed to the city, even though it has no chief financial officer after he abruptly resigned in March. Through numerous scandals, the mayor has simply ignored the local paper, MLive/The Flint Journal.

Because of this, council meetings are the only place for the paper to ask questions. Mays lashed out at Ahmad on April 24, saying “I call the police … We gonna fight for our turf. Write that! You not going dictate our turf. MLive ain’t going to dictate it.”

“Who do you think you are?” he said, flailing his arms.

“You think you above this?” Mays shouted.

Weaver’s director of public relations, Candice Mushatt, called TheDCNF three days after a reporter inquired about transparency issues. TheDCNF asked if it had given any interviews to the Flint Journal since May 2018. Mushatt refused to answer, instead trying to find out TheDCNF’s sources.

“My biggest question is what inspired you to ask me that question?” she said. “You’re an outsider.”

When TheDCNF asked Mushatt to identify an instance of engaging with the local paper, a second person, who Mushatt did not announce was on the line, began making conspiratorial remarks and questioning whether TheDCNF’s reporter had given his name accurately.

“We don’t respond to bogus calls with bogus names,” he said.

The man said his name was Jesse after TheDCNF asked. Asked for a last name, he said it was “Jesse Jesse.” Asked for his job title, he said “I don’t have a job title.”

TheDCNF remarked that turn of events was unusual.

“It’s gonna be better than the stories you got,” Jesse said, and Mushatt hung up the phone.

Mays was, until recently, chairman of the council’s finance committee, in charge of overseeing the vast sums of federal and state dollars flowing into Flint after it was discovered that the city’s water was tainted with lead.

Ahmad reported in November 2019 that Mays, who is black, tried to remove Fields and Worthing from a council hearing when the pair tried to bring up issues with the way those dollars were being spent. The women, who are both white, later said Mays’s treatment of them was part of a pattern of sexism and racism and asked the council chairman to take away his finance chairmanship.

The councilwomen’s request was granted in January, and police had to remove Mays from the room when that decision was made. Mays still claims he is the chair, referring to the new one as the “alleged” chair.

Mays pleaded guilty to felonious assault in 1987, MLive reported. He served a year of probation after he threatened a man with a gun after the man threatened Mays’s life.

Mays was also sentenced to a month in jail for impaired driving after “police said they found the elected official outside a disabled car, facing the wrong way on the expressway more than two years ago,” MLive reported in January 2016.

He was also handcuffed and removed from a council meeting in August 2016 during an argument about a trash contract. Weaver and Mays wanted the city to hire a company whose executive later pleaded guilty to conspiracy to commit bribery, but a majority on the council blocked it. The city later paid Mays $4,500 after he said his handcuffing was unlawful.

In June 2017, Mays exploded at a city council meeting, jumping up and searching for a citizen he claimed made a rude comment. A police officer stood in his way, and after Mays had been yelling for a number of minutes, the officer made a remark to the councilman, though it’s not exactly clear what was said.

Mays screamed at the officer: “White man … motherfucker. You … Kate Fields … this is a racist, nasty town. Call your momma, white man! My momma dead! … Enough is enough! White folks! Ignorant folks! … I’m elected! … You is a fool. It ain’t no game, policeman.”

In November 2017, Mays was sentenced to a week of community service for pawning his city-issued laptop nine times. As part of the plea deal, his sentencing was delayed until after the election, which he won with nearly 70 percent of the vote.

Councilwoman Worthing told TheDCNF Ahmad has “done a lot of digging, and they don’t like that. She’s like 24, she’s never been unprofessional, she’s good at her job.”

Worthing said Mays’s rage and the mayor’s secrecy are not just directed to the media, but to council members, too.

“He threatens us, our staff, the media. What you saw with Zahra in the video is not the worst of it — it’s every meeting, to other city council members. We send letters to the civil rights commission, but since we’re elected officials we’re supposed to govern ourself and our council chair has not helped us.”

“If there’s an issue that the mayor wants and we ask questions, it will get turned around that we are evil, bad, racist,” Worthing continued. “And the city attorney is part of that, even though she’s supposed to be the city council attorney as well.”

“We’ve been called nasty white women by Mays and his supporters. … One of his supporters compared me to the white woman who got Emmet Till killed,” Worthing told TheDCNF. “He says none of us belong. He says he wants to recall the three white people [on the council], and get people who will vote the right way. He brings race into everything.”

Not only has the police officer who used to be stationed at council meetings been reassigned, but now when the police are called because Mays is disrupting a city council meeting, they don’t show up, Worthing told TheDCNF. Mayor Weaver appointed the police chief, Tim Johnson, even though he wasn’t even a certified police officer and had no power to arrest someone without calling a licensed officer.

“Pulling an officer away from [the council meetings] was a political move,” Worthing said. “We have implored him to send an officer, we have called 911. An officer does not show up anymore.”

Mays, in an interview with TheDCNF, said he was responding to how his fellow council members and Ahmad treated him.

“When the whites call me racist in a public meeting, I say I don’t know if you racist, but you sure is Eric Mays-ist … Flint is majority black,” he said. “I helped clear some members off the council, and I’ve got two or three more to go.”

The city council is “made up of five blacks, one Hispanic and three whites,” he continued. “Our meetings say ‘Stick to business,’ but the white councilmen have been calling me and the mayor racist, misogynist, obtuse. Some of the words I had to look up. I’m not like Michelle Obama, my philosophy is when they go low, we go lower.”

Of the incident with Ahmad, he said, “as I attempted to ask pertinent questions in the Finance Committee meeting, the alleged chair … told me I couldn’t ask questions, stopped me. I said point of order. They went to call the police chief, the police chief know what happened, but he’s appointed by the mayor, so they didn’t respond.”

“So they got mad and went to the Journal lady, she’s shaking her head, and I said don’t shake your head and write that story about me and the police chief,” Mays told TheDCNF. “I said I will bring 10 people in front of your news organization protesting, and she said, ‘Are you threatening?’ I said that’s a promise.”

“The mayor is protecting the reputation of Flint because we’ve got a national and international reputation to protect. The media ain’t telling the story,” he said. “I do have a relationship with the mayor, and we talk to the media, but certain media folks, we’ve watched them locally and see who they’re aligned with, and when we see that, she just don’t talk to them.”

Ahmad often writes multiple stories a day and has documented problems around Flint and its cast of officials.

The government of Flint has faced significant problems, with the young reporter being one of the few things standing between billions of dollars and lack of transparency.

Weaver did not respond to a story Ahmad wrote marking the five-year anniversary of Flint’s water crisis.

Worthing said it is “so hard” to feel let down from all sides. “Emotionally, it’s been draining.”

“We were poisoned by [former Michigan Gov.] Rick Snyder, we were let down and it was the poisoning of a city,” she said of the water crisis, putting the blame with the Republican-led state leadership that took emergency control of the city due to prior financial mismanagement and made the decision to switch to the water supply that caused problems.

“That part’s factual,” she continued. “However, not only were we let down by our state government, now we’re dealing with corruption in the city as well.”

“The harassment by the administration,” Worthing told TheDCNF. “Mays and others on council has been overwhelming. … But what keeps me there is the fact that I want to make sure the city is doing things correctly. … There’s no one else who’s going to willingly want to do it — because you’d have to be crazy.”

Luke is the author of the new book Obstruction of Justice. Email Luke at [email protected] Follow him on Twitter.

Poll: Over Half Of Americans Support Education Reform Plan Similar To Warren’s