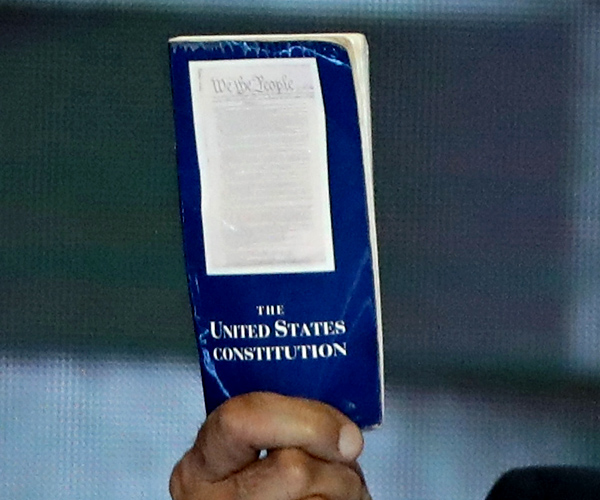 The Washington Examiner, Reagan’s favorite paper, has reported the following: that community college students in Michigan were arrested and actually thrown in jail over passing out dangerous literature on campus. What literature, you ask? The Communist Manifesto? No, that’s likely required reading. Instead, the school administrators had a problem with their students handing out copies of The Constitution of the United States of America.

Read the crazy excerpt below:

In a lawsuit filed in federal court on Wednesday, students at Kellogg Community College, a small public college located in Battle Creek, Mich., claim their constitutional rights were violated when they were arrested and forced to spend a night in county jail for refusing to stop handing out pocket Constitutions on school grounds in September 2016.

According to the complaint, filed on the students’ behalf by the Alliance Defending Freedom, Michelle Gregoire, Brandon Withers, and three other students “tried to distribute pocket-size copies of the United States Constitution in an open, generally accessible area of the campus outside the Binda Performing Arts Center,” but they were told to stop their efforts because “they had not first obtained a permit and because expression was only permitted in one location.”

Gregoire and Withers, both members of Young Americans for Liberty, a national student organization promoting constitutional conservatism, then made the mistake of engaging “interested students in conversation about liberty on campus,” which led to KCC officials demanding they stop because they were “impeding students’ access to education.” Gregoire and Withers “politely informed KCC officials that they planned to continue to exercise their First Amendment rights.” Withers and two others were subsequently placed in handcuffs, forced to spend the night in county jail, and charged with trespassing.

Trump Tweets About Kristen Stewart Once; Stewart Calls Him “Obsessed”