WASHINGTON, D.C. While some are hesitant to subscribe to any “isms”, –Melody Hensley is a proud feminist and atheist. As the executive director of the Center for Inquiry in Washington and organizer of the Women in Secularism national conference, she finds herself defending her ideals on Twitter often. Hensley said her outspoken nature made her a target for ‘atheist misogynists and men’s rights activists‘, which culminated in one man waging a two-year hate campaign against her.

She claims the man in question published her tweets using Storify, and after repeated harassment from a cybermob of ‘more than 400 people’, was diagnosed with PTSD by ‘a very good psychiatrist.’

For the next six months, Hensley says she was bedridden. In 2013 she tweeted, “Stressed out about leaving my house tomorrow by myself and going to unfamiliar place.” You’d think someone who was afraid of cyber stalkers attacking her IRL (“in real life”) would be less forthcoming about when they’ll be alone and out of their house.

The tweet that really stirred controversy came last Sunday, when she made a claim many are finding ignorant and egocentric, to say the least. ‘Military/ex-military combat folks: there are groups that have higher statistics of PTSD than you. You need to educate yourself.’


Hensley sent the message to her 3,195 followers on Twitter, which immediately instigated controversy. One particularly heart-wrenching response reads: ‘@MelodyHensley go get blown up and see your friends die, then you’ll understand true PTSD.’ 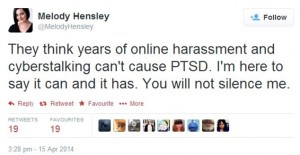 Instead of admitting her sufferings don’t equal that of those who have seen war, she instead pushed her case that she was just as much a victim. “I don’t discount military vets’ PTSD. I care about everyone with PTSD. I want people to realize that this is not a military-only condition.”

While that last bit may be true, most can decidedly agree that Twitter users don’t have higher PTSD than combat veterans. It’s a paltry suggestion, and one that people weren’t willing to let slide. Hensley went on the defensive to defend her earlier tweet, stating, “I support vets but not when they become harassers. When they come onto Twitter & make fun of me having PTSD deny me having PTSD or threats.”

There’s a possibility that Hensley’s PTSD is being triggered by something else that she’s not ready to confront, but her admitted ‘outspokenness’ makes this unlikely. Why would she pass up an opportunity to garner more sympathy and attention?

But hey, keep your chin up Hensley. There’s gotta be someone out there who has it worse than you.

Guns in Schools, Churches, and Airports: Welcome to Georgia (VIDEO)