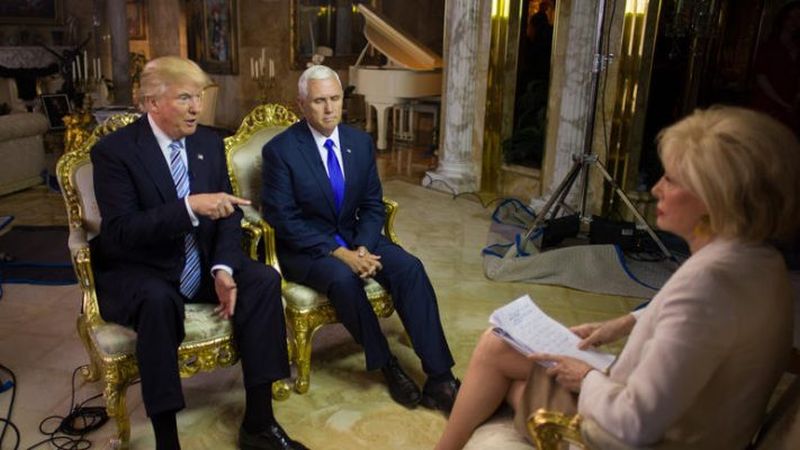 Presumptive Republican presidential nominee Donald Trump told Leslie Stahl on “60 Minutes” that his ban on immigration from countries with high instances of terror is more important than any constitutional issues the policy may raise.

Stahl asked Trump whether his initial proposal to restrict Muslim immigrants ran afoul of the Constitution’s First and Fourteenth Amendments. Trump countered that constitutional concerns could be allayed by banning immigration from specific locales, as opposed to pursuing a blanket ban on Muslims. He then explained that the Constitution might take a back seat to his policy priorities.

“So you call it territories. OK? We’re going to do territories. We’re going to not let people come in from Syria that nobody knows who they are,” Trump said. “The Constitution, there’s nothing like it,” he continued. “But it doesn’t necessarily give us the right to commit suicide, as a country, OK?”

“The choice is not between order and liberty,” he wrote. “It is between liberty with order and anarchy without either. There is danger that, if the Court does not temper its doctrinaire logic with a little practical wisdom, it will convert the constitutional Bill of Rights into a suicide pact.”

Justice Arthur Goldberg, one of the most liberal jurists in the history of the Supreme Court, invoked the phrase in 1963, writing the Court’s opinion in Kennedy v. Mendoza-Martinez. “The powers of Congress to require military service for the common defense are broad and far-reaching, for while the Constitution protects against invasions of individual rights, it is not a suicide pact,” his opinion read.

Judge Richard Posner of the Court of Appeals for the Seventh Circuit, who recently apologized for suggesting that federal judges need not study the Constitution, published a book in 2006 called “Not a Suicide Pact: The Constitution in a Time of National Emergency.” (RELATED: Federal Judge: We Shouldn’t Spend One Second Studying The Constitution)

Trump recently ran into trouble for defending articles of the Constitution that don’t exist. At a meeting with House Republicans, Trump was asked a question about Article I powers, or powers belonging to Congress. Trump reportedly responded by saying “I want to protect Article I, Article II, Article XII, go down the list.”

There is no Article XII to the Constitution.

“What we’re left with is a Faustian choice between malfeasance and very callous disregard for details,” South Carolina Rep. Mark Sanford said after the meeting.

The RNC’s Platform and Convention Program are Super Nationalist

Meet The New App That Lets You Talk Politics Anonymously