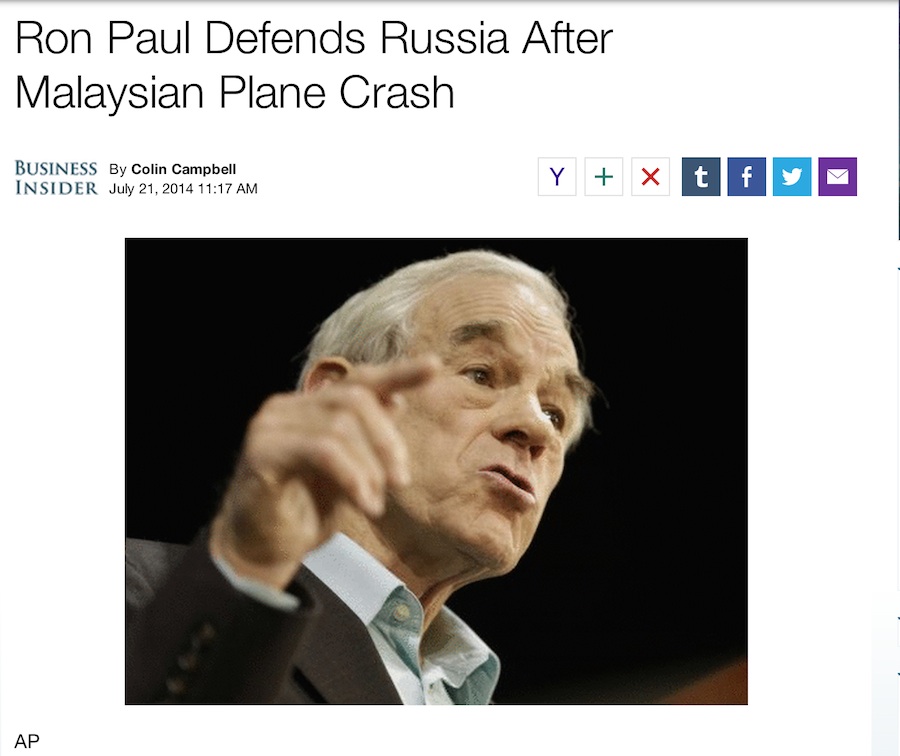 “Ron Paul Defends Russia,” the Associated Press headline reads. Neocons are fond of painting Ron Paul and libertarians as people who just hate America. If that’s not the case, then why do they sound like they do?

After a civilian airliner was shot down over Ukraine, Paul rushed to defend Putin from allegations that he was involved in supplying the missile launcher to separatist forces who may have shot down the plane. And how did this former congressman defend Russia? He did it by pointing out how America is supplying arms to the ISIS rebels who are currently destabilizing Iraq. He also directly blamed the destabilization in the region on the West, saying:

“They will not report that the crisis in Ukraine started late last year, when EU and US-supported protesters plotted the overthrow of the elected Ukrainian president, Viktor Yanukovych. Without US-sponsored ‘regime change,’ it is unlikely that hundreds would have been killed in the unrest that followed. Nor would the Malaysian Airlines crash have happened,” Paul wrote.

Whoa, whoa, whoa there Dr. Paul. Now you’re just assuming and speculating. Not everything evil that happens around the world is because the United States intervened. I’m a non-interventionist libertarian, but I think it’s possible that foreign countries will do evil things, even if we don’t have anything to do with it. And that’s just it, logically Dr. Paul might be correct, but tactically (if the goal is to get Americans to embrace libertarianism) he’s totally wrong.

During the Cold War, The Economist magazine coined a term called “Whataboutism,” where every time something bad happened in Russia, the Soviets would say: “Well what about,” and then insert some vaguely related negative event in the West. This was used to deflect criticism from major events such as the crisis at Chernobyl. Was Chernobyl the fault of American intervention?

If libertarians don’t want to sound like America-hating Russian apologists, maybe it’s time to put down the old Soviet rhetoric and adopt something a bit more palatable to the American people, at least if we care about actually having our ideas implemented. Don’t give your political enemies an easy headline to write that can make you look bad.

All that and more on this incendiary episode of The Freedom Report podcast!