Conoy Township, Pa.-  Drive through any town in America and you will most likely see a welcome sign, a crime watch sign, even a Gun Free Zone sign, but not in Conoy Township, Pennsylvania. The signs read, “Welcome to Conoy Township. THIS IS NOT A GUN FREE ZONE”.

This unanimous decision to install a dozen or so signs along the major roads of Conoy were made by the town’s supervisors as an effort to deter crime in this rural town of 3,000.

Stephen Mohr, one of the township supervisors, stated that they are welcoming good people to the town as well as serving as a warning to any would-be criminals. “I think even those who have bad intentions can read.”

‘The first word on there is “Welcome”… we have a lot here that we take pride in. What we’re telling people is that when they do come here, they should feel safer knowing that everyone in the township is watching out for them,’ Mohr said. ‘And the criminal — he should realize that going into this township he could have a bad day.’

Note: There is a glaring disconnect between the wants and needs of average townspeople and this female news anchor who can’t help but read the teleprompter with a biased tone. Watch it here:

“I guess it’s a good idea”, says Lyle Rider who runs BMA Cycles in the town. But it’s going to take more than just a sign — I don’t think that would deter a hardened criminal,” he says to foxnews.com

This may be the start of a new trend with  towns across the country, one that goes against the more common signs that are posted, like those alerting people of areas where firearms are prohibited by law.

Mayor Brad Holton of Greenleaf, Idaho told a Foxnews.com reporter, his town is considering posting similar signs at the next city council meeting in March.

“If you were a thief breaking into homes and businesses,” asks Greenleaf  “would you choose a city that openly endorses the ownership and training of guns to protect persons and property?”

The few critics who disagree were not the residents of the town, but people like Jonathan Hutson -- a spokesman for the Brady Campaign to Prevent Gun Violence.

‘These signs are silly, because the Second Amendment guarantees the right of law-abiding, responsible citizens anywhere to own guns in their homes. As a matter of fact, no jurisdiction in America completely prohibits the carrying of guns in public.’

To say that no jurisdiction “completely prohibits the carrying of guns in public” is also misleading. *See maps illustrating Concealed Carry in U.S. as well as Open Carry States Map.  Jonathan uses the term “completely” that undermines the stringent laws that states enforce, making it virtually impossible for an average, law-abiding citizen, who isn’t law-enforcement to carry.

Additionally, states like New Jersey do not even honor licenses or permits that have been issued by other states. 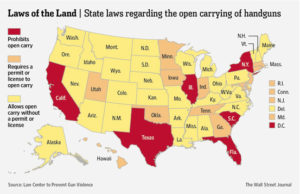 The executive director of Cease Fire PA -- Shira Goodman, another critic of this action, asserts that despite the announcement that there are law abiding townsfolk who will be armed, she makes it abundantly clear where there are places in the town that guns are, in fact, prohibited.

‘Are there no schools in this town?’ Goodman asked. ‘How about U.S. post offices? What about private business owners or houses of worship who choose to bar firearms from their property?’ Goodman added, ‘The intent seems to be to scare those who might consider criminal activity. The likely effect will be to embolden a shoot first, Wild West mentality.’ 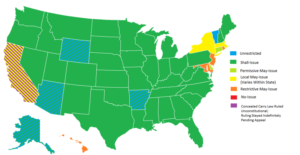 Mohr said residents are free to have to their own rules about guns, and the township follows federal and state policies regarding guns in post offices and schools. He also assures that signs only serve to not only warn, but to welcome the towns observance of the 2nd Amendment right to carry -- an idea that also promotes safety.

“Those people that need to wake up and realize that the right to carry a gun in a lot of areas have already been curtailed,” he said, noting that other jurisdictions, including New York City, put the onus on residents to show a “special need” in order to carry guns, says Mohr.

Whether or not these signs will prove to act as a crime deterrent, only time will tell. However, it does have some economists speculating.

David Mustard, an economics professor at the University of Georgia doesn’t think reduction of crime is likely to be seen.

“My guess is that this may… lead a small number of people to reconsider committing criminal acts, but the signs are unlikely to provide so much new information [about the town] that they result in a large reduction in crime.”