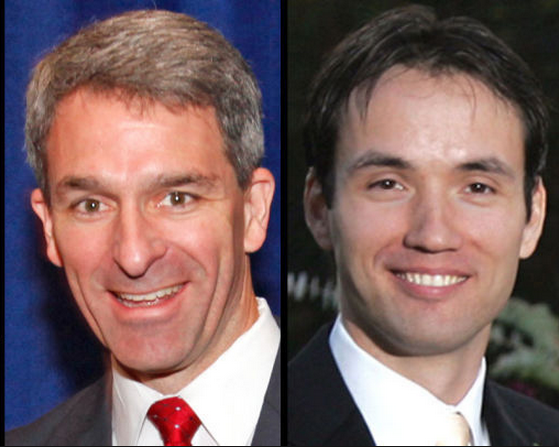 There’s likely only one way for Cuccinelli to get to the governor’s mansion, and it’s through Robert Sarvis

Ken Cuccinelli’s (R) camp has been pushing hard to win the libertarian vote in Virginia. They should be. A tight race for Cuccinelli against Terry McAuliffe (D) is tighter thanks to Robert Sarvis (L), the Libertarian candidate who is polling at 12%, according to Politico. Cuccinelli is trailing at 35% to McAuliffe’s 44%. If Cuccinelli wants to win, there’s one endorsement he absolutely must have; that of Robert Sarvis.

The Cuccinelli campaign has made overtures to the Libertarian vote in Virginia. They successfully secured the endorsement of Senator Rand Paul (R-KY) and former Congressman Ron Paul. This must have been met with a sigh of relief by his campaign. But they shouldn’t feel too relieved. Libertarian voters don’t usually do what they’re told, or vote for someone just because they received another politician’s endorsement. Ron Paul doesn’t speak for all libertarians. His endorsement will probably not do much to bolster Cuccinelli’s campaign considering that he is out of politics now. But meeting with Sarvis might.

After two terms of governance under Bob McDonnell (R), an administration plagued by corruption and lack of fiscal responsibility, libertarian voters are more than skeptical about the promises of Republicans.  Many are understandably nervous that they’ll have another GOP candidate that campaigns like a libertarian, and governs like a Democrat.

Sarvis is performing well in Republican strongholds such as Southwest Virginia and the Shenandoah Valley, the most conservative areas of the state. By voting for Sarvis, voters would help the Libertarian Party gain ballot access. Virginia law states: nominees of a political party that “at either of the two preceding statewide general elections, received at least 10 percent of the total vote cast for any statewide office filled in that election” are exempt from needing to gather signatures. So voting for Sarvis would help enable the LP to save money and run better campaigns in the future. That’s a big upside, rather than the downside of voting for a potentially losing Republican candidate and getting nothing.

Buzzfeed featured a popular article about why libertarians in Virginia should support Cuccinelli, and many of the reasons are very compelling. Cuccinelli strongly supports federalism, opposes eminent domain, and came out strongly against US intervention in Syria. These are all very good reasons to support him if you are libertarian. But like any politician, there are some strong negatives.

The attorney general launched a website this year that promoted the state’s law that banned oral and anal sex, the anti-sodomy law. The Cuccinelli camp defended this as an “anti-child predators law” and even appealed the law after it was found to be unconstitutional by the Supreme Court. If the appeal had gone through (it didn’t) then it would have allowed a law that 90% of people in America could have been found guilty of. Politicians need to stay out of the personal lives of others, and Cuccinelli campaigning on these issues should send up red flags to Virginians interested in privacy rights.

Cuccinelli also believes that Virginia’s freedom of information laws do not apply to the Office of Attorney General. Although he complied with FOIA requests, he began inserting opinions into those requests of why he should not comply. That is another red flag, considering that if he were governor, libertarians fear he might not run a transparent administration.

It’s not often that Libertarians find themselves as king-makers in political races. More often than not their vote totals are so miniscule that they can be safely ignored. And if they actually do gain an advantage, the government will step in, along with the media to ensure that they do not succeed.

A third party’s only real power now lies in their ability to act as an anchor to one of the two major political parties, showing the politicians that their issues matter and that their constituency will be heard. For Sarvis, ‘winning’ might be that Cuccinelli would be forced to pledge to govern with a more transparent administration, and one that is committed to privacy rights in order to gain his votes.

Or at the very least, it might sway my vote.