Is This The Dumbest Patent Troll Ever? 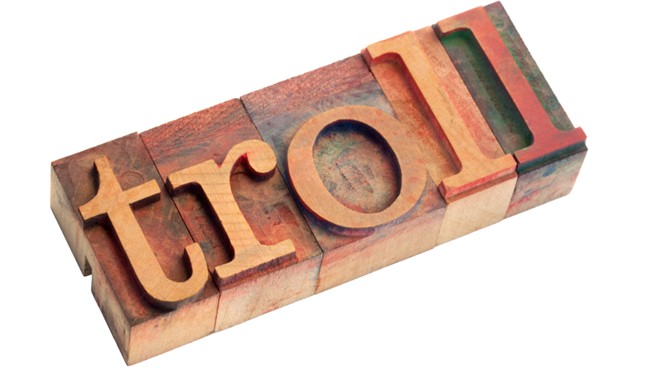 Congress is currently working through the arduous process of passing a long-overdue reform to patent laws designed to curb the widely known and widely loathed practice known as patent trolling. Or, as those of us with libertarian friends call it, “the reason so many of our friends hate intellectual property.”

Patent trolling, for those who don’t know, refers to the practice of taking out a patent, either on the concept for an invention, or on some process for using technology, or what have you, and then never using it for anything other than suing anyone who might actually achieve what your “patent” is for, all in order to force their target to pay them to go away. “Nice business you’ve got there,” the patent troll says, “shame if anything were to happen to it.”

Imagine, for instance, someone patenting the concept of “phones that can make video calls” long before the iPhone came along, and then never making any attempt to invent such a phone, but still suing Apple the instant they came up with one for “infringement,” and you have a classic idea for a patent troll.

Except, actually, that doesn’t even get at how ridiculous the whole thing is. No, imagine that someone saw that Apple had already designed such a phone, and then claimed they owned the very concept of video calls when used in an ultra-specific context without making any effort to explain why making such calls in that context is sufficiently different to deserve its own patent, as if it were a whole separate invention.

Oh wait, someone did do that.

Meet the Dallas company known as Securus Technologies, Inc. Securus is a little-known company that designs products for use in prisons. Which, fair enough, I guess rape cages don’t build themselves. But it’s not Securus’ line of work that’s the problem. Rather, it’s the fact that they own a number of ultra-vague (and arguably meaningless) patents that they use to try to bully competitors out of the marketplace.

Who knows? But people are starting to ask.

Securus is accused of being a patent troll – a company that asserts patent claims, such as that prison phones are somehow different from office phones in ways conjured by Securus, then sues to enforce them knowing most companies will pay up rather than endure an expensive court fight. Frustration with this practice – it clogs the courts, bleeds competitors and puts a drag on the economy – has enabled the PATENT Act to move toward passage with bipartisan support.

Securus has filed 12 lawsuits against 19 competitors in the last decade, most of which have resulted in settlements by companies that considered it cheaper to pay up than litigate.

Got that? Without explaining how this requires any innovation at all, Securus has just out-and-out declared that it owns the concept of making video calls from prisons, and conveniently sues its competitors anytime it needs money, knowing they’ll cough up rather than deal with a court battle.

To understand the stupidity of what they’re doing, imagine you started Facetiming with someone while at 711, only to have a random lawyer pop up beside you.

“Aha!” He exclaims. “You’ve been served! I represent a company that owns the patent on video calls from convenience stores!”

“How is that different from just making video calls generally?” you ask, confused.

You tell him to go screw himself, hang up, and go outside to call your lawyer. But as soon as you dial the number, another lawyer jumps up.

“You’ve been served!” he squeaks. “I represent a company that owns the patent on phone calls from areas with high amounts of foot traffic!”

“How is that different from just making phone calls in general?” you ask, angrily this time.

You tell him to fuck off, and decide to just run home and call your lawyer there. But no sooner do you start the call from your home than a video call from an unknown number pops up. You take it.

“You’ve been served!” says another lawyer from your video screen. “I represent a company that owns the patent on phone calls with legal representatives!”

Before you can answer, another phone call comes in, and you call it up onscreen.

“No, you’ve been served!” says a last lawyer, bouncing up and down excitedly on your phone screen. “I represent a company that owns the patent on video calls with people suing you!”

You throw your phone in the blender in disgust.

Ridiculous? Not according to Securus’ apparent legal theory.

Fortunately, one of Securus’ competitors is suing to invalidate this and many other patents that they allegedly “own.” But even if the extortionate lawyers at Securus are put out of a job, patent trolls like them are allowed to go on existing.

Which is why we should all hope the Senate passes patent reform. It’s time to send all those squealing lawyers back to the unemployment line, and let Americans use their technology — and innovate with it — in peace.