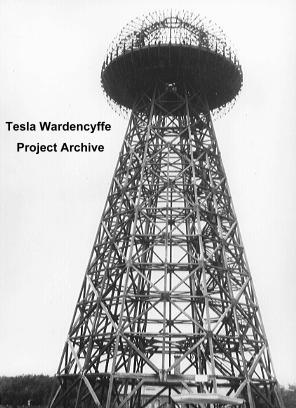 There has been a great increase in the popularity of inventor Nikola Tesla in recent years; well deserved, as Tesla’s work helped shape the modern world.  However, his return to the spotlight has brought with it fabricated or exaggerated claims about his achievements and intentions, some of the most persistent surrounding Tesla’s biggest failure: the Wardenclyffe tower.

The site has recently been purchased, thanks in part to a fundraising effort promoted by online comic author Matthew Inman, with intentions to convert it into a museum.

One particular myth about the Wardenclyffe facility often repeated by conspiracy theorists is that Tesla would have been able to produce and distribute limitless, wireless power worldwide. Upon discovering this, the conspiracy theorists say, Tesla’s investors, led by J.P. Morgan, withdrew funding from the project. This explanation of Wardenclyffe’s failure is wrong.

In 1879, David Edward Hughes discovered that a telephone receiver connected to a microphone of his design would generate a signal wirelessly if a spark was generated. Using more rigorous scientific techniques than Hughes, Heinrich Hertz verified Maxwell’s theory  experimentally between 1886 and 1888. It was his experiments that would inspire later developments in radio by Nikola Tesla, Sir Oliver Lodge, Stepanovich Popov, and Guglielmo Marconi, among others.

At the turn of the 20th century, both Marconi and Tesla began investigating the possibility of sending a wireless signal across the Atlantic–Tesla began planning the Wardenclyffe Tower in 1898, and after a letter to J.P. Morgan in 1900, received agreement from Morgan to finance the project, though with the warning that he would not provide any funding beyond $150,000. Tesla had planned to transmit power wirelessly in addition to sending communication, but he did not advertise this to Morgan initially.

On December 12th, 1901, just as construction on Tesla’s project was beginning, Marconi claimed to have successfully transmitted a signal– Morse code for the letter “s”– across the Atlantic. While Tesla’s facility was still under construction, Marconi was using his system to relay messages between President Theodore Roosevelt and King Edward VII.  It was at this point which Tesla sent a series of letters to J.P. Morgan soliciting additional funding for the project, despite the fact that Morgan had already warned Tesla with his initial investment that he would provide no further financing.

In Tesla’s third letter to Morgan in 1903, he finally reveals his intent to use the facility to transmit wireless power, saying “. . . If I would have told you such as this before, you would have fired me out of your office. . . . Will you help me or let my great work—almost complete—go to pots? . . .” Morgan responded on July 14th “I have received your letter… and in reply would say that I should not feel disposed at present to make any further advances.”

Quotes from Morgan as stated by conspiracy theorists suggesting that wireless power would be impossible to meter, and therefore, would be a bad investment are taken out of the proper context; Tesla had tried to convince Morgan to further invest in his project by revealing the capability to transmit power, which Morgan simply did not find an attractive proposition, but in no way was wireless power the reason for Morgan not investing, as he had already told Tesla that he did not intend to invest more than the original agreed upon amount. The “Rich Man’s Panic” of 1903 made it difficult for Tesla to acquire investment from other sources. His lack of funding was exacerbated further by the expiration of his patents for AC motors and other methods of power transmission.

Wireless power, due to the aforementioned facts, could only be said to have killed Wardenclyffe if it was the cause of the additional expense of the project compared to Marconi’s radio system.

As for the claims that this power was “free energy” not just in its inability to be metered but also its generation, it seems that they stem from ignorance of how Tesla had designed the facility; the transmitter was to be powered by a 200 kilowatt Westinghouse alternating current generator driven by a Westinghouse auto compound engine. Some conspiracy theorists claim instead that it was to be powered by Tesla’s apparatus for the utilization of radiant energy,” but again, the conspiracy theorists fail to understand that “radiant energy” isn’t “energy all around us,” but rather, is defined as energy in the form of electromagnetic waves– in essence, what Tesla patented is no more a “free energy” device than a solar panel is.

In fact, in the patent, Tesla specifically mentioned that “The apparatus being arranged as shown, it will be found that when the radiations of the sun or of any other source capable of producing the effects before describe fall upon the plate P an accumulation of electrical energy in the condenser C will result.”  This isn’t nearly as mind-blowing as somehow tapping into the æther for an unlimited power source would be, but then again, isn’t it par for the course for conspiracy theorists to pretend reality isn’t interesting enough?

Nikola Tesla was one of the greatest inventors of the 20th century– one of the greatest of all time, even.  Because of this, I would like to echo the sentiment of Brian Dunning, producer of the Skeptoid podcast, in saying that spreading falsehoods about Tesla is “an insult to the man and his accomplishments.”

What is implied by inventing stories about the man?  Are his accomplishments somehow insufficient?  Are they somehow uninteresting enough that History Channel needs to insert the claims about free power, death rays, and an earthquake machine into their programming to make it worth watching?  It almost seems as if, in coming out of obscurity from popular culture, Tesla is more forgotten than he was buried within physics textbooks, and that is a real shame. 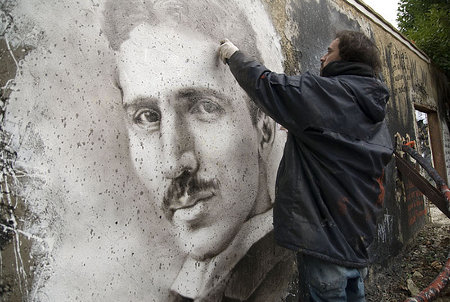 Yahoo CEO: We faced jail if we revealed NSA secrets “If you don’t comply, it’s treason!”

So you are saying that there really is no power supply that he invented that needs no electricity or gasoline or other standard fuel to power it? Is the story of the car that he drove up and down the East Coast without needing to gas up or power up untrue? Thank you,

Yes, there really is no power supply which Tesla, or anyone else, invented which needs no electricity or gasoline or other standard fuel to power it. The laws of physics prevent such things. Energy is always required to do work, and that energy must have a source. “There ain’t no such thing as a free lunch”, especially in physics.

Oh yeah… He used the earth as a capacitor, also the coil was built over a aquifer, the movements of negative ions over the conductor rod, built a charge on the coil top. Your brain uses the flow of ions to create flow of charge between synapses. Also we are building nano carbon machines powered by the flow of negative ions over the face. You let them go in canals of flowing water. Also today, we have cold fusion, 17k replications of it.. All this what I mentioned does not violate the laws of physics, Tesla just found a big well of energy, that is unlimited…

the definition of free is misunderstood here. Tesla was using the energy that is around us, he was not creating it. He basically made a receiver of energy. Think like solar panels…

What could he have invented if JP Morgan actually funded him further….. That is the question. Einstein was funded by the US Government and he created the Nuke.

Yes, there really is no power supply which Tesla, or anyone else, invented that needs no electricity or gasoline or other standard fuel to power it. The laws of physics prevent such things. Energy is always required to do work, and that energy must have a source. “There ain’t no such thing as a free lunch”, especially in physics.

There is “free energy” in cosmic rays–and the flux is constant day and night.

Well put I’ve researched this field and think you nailed it. A wireless energy transmitter can work but uses the power fed into it in such a way that the output can’t exceed the input. It still can be useful because it can power hard to reach things and could be crowd funded. IE the billing problem is gone even if it were real.

The eCoupled system is the most commercial equivalent today its from research company Fulton Innovation (part of the Amway R &D arm Alticor ). http://en.wikipedia.org/wiki/ECoupled