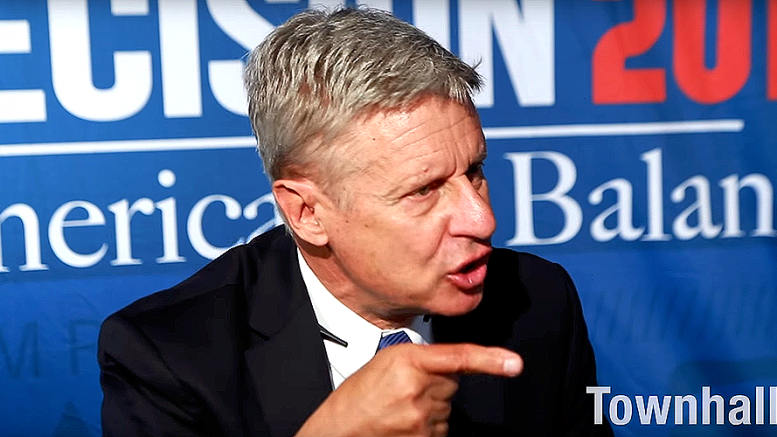 In a recent interview at Anarchapulco with Josh Sigurdson of World Alternative Media, Judd Weiss, former running mate of John McAfee spilled some stories from his experiences with the Gary Johnson campaign in 2016.

Weiss clarified near the beginning that he’d been a donor, fundraiser and voted for Johnson in the 2012 election cycle – he even threw two fundraisers for him that year – and had opted to support McAfee and eventually run with McAfee in 2016 in a desire to see the Libertarian Party present a “cool” or “interesting” option in the general election. However, during the race (Weiss ran with McAfee from early April until the National Convention at the end of May), they encountered a lot of what he described as “vicious” pushback from Johnson supporters and the campaign itself.

Weiss did not necessarily attribute these actions to Johnson himself (“Gary’s such a nice guy”) but to his campaign itself and his campaign manager Ron Nielson, and cited various examples of trolling, campaign sabotage and corruption.

Weiss clarified in a message regarding this interview: “This isn’t necessarily a discussion of criminal behavior. This is about a problem of scamming libertarians, preying on those who want to help the cause, squandering valuable resources and opportunities.”

In one of the most interesting points Weiss made in the video, he claims Johnson’s campaign manager received over $4 million from the campaign. He corrected this record in comments on Facebook:

“One point of correction, I said the wrong number for how much Ron Nielson’s management entity pocketed from the campaign. I looked it up again on the FEC site and the monthly payments total to $1,850,800. A staggering salary that is more than 10 times higher than what campaign managers earn on large mainstream presidential campaigns from household names.”

For sourcing regarding Johnson’s campaign numbers, one can find links to August, September and October’s payees (and other months) from the FEC.

Weiss also provided a PDF of the disbursements made (accessible here: Gary_Johnson-Disbursements), including notes and highlights, to source additional claims, including the Johnson campaign paying off Chris Thrasher, McAfee’s former campaign manager, and J Wilson (a journalist at A Libertarian Future).

Many of Weiss’ other claims include that the Johnson/Weld ticket paid convention expenses for attendees, who showed up exclusively for the Presidential nominating process and didn’t bother voting on other convention business. Though that sort of thing is difficult to trace directly, this is a common rumor among several party members in numerous states, that they’d been offered their expenses paid or other financial favors to their state parties to attend the convention and vote for Johnson/Weld.

If the campaign did not pay for these expenses transparently in a way that can be observed in FEC filings, another possible source of those funds and their dispersal could have been through the payments made to Nielson’s management company. Campaign staff and advertising were, according to the FEC records, paid directly by the campaign, so it puts a solid question mark as to why Nielson was paid so much compared to other campaign managers, and what that money went towards.

Prompted by the claim that Weiss made about the Johnson campaign effectively “buying” the votes of delegates, an Ohio delegate by the name of Lisa Bennett shared an email (a screenshot of which is below) received between the first and second Vice Presidential vote, where Johnson’s campaign pledged $20,000 to the LPO for “ballot access”, citing Johnson’s victory for the presidential nomination and their hopes for Weld’s win on the second ballot. The email specified that the money was not contingent on Weld’s win, nor did it obligate the delegates to vote for him. It did however reiterate how this was a demonstration of the commitment of the Johnson-Weld campaign.

Bennett (and another delegate who wishes to remain anonymous) confirms there was a conversation had among the Ohio delegation on the voting floor, regarding the content of this email. Records show that Weld actually lost votes from Ohio in the second ballot (from 17 to 11), and interestingly enough, the Johnson-Weld campaign never followed through on donating the money to the LPO, though Neilson himself shook hands with LPO Vice Chair Scott Pettigrew. Members of the state party even followed up with members of the Johnson campaign asking for the pledged money and never received a response.

The email is below: 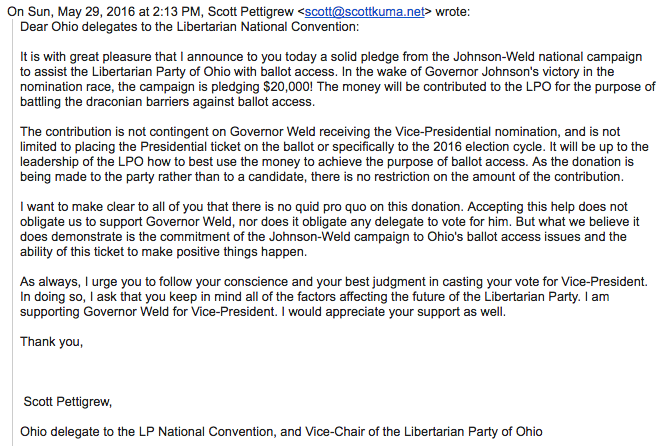 For more detailed information regarding vote totals in each stage of the voting process, an analysis can be found here.

Additional information continues to surface about the realities of the Johnson-Weld campaign, as people come forward to discuss their experiences. As Weiss mentioned in the video, he wasn’t interested in bringing this up during the general election, and he did vote for Johnson over either Clinton or Trump.

The Weiss interview can be viewed in full here:

There’s a lot to learn from the experiences of 2016, both in mainstream politics and in the libertarian movement, and hopefully the hard-working volunteers, donors and committed activists of the Libertarian Party will not be played this way again. By identifying corruption in party ranks and rooting it out, we can prove libertarian concepts of self-regulation and self-policing, and illustrate how true freedom is not synonymous with exploitation or fraud.

Correction: The original article mentioned Chris Thrasher was a party contacted to attempt to procure the $20,000 for LP Ohio. Though according to sources, he was contacted, he had no authorization to disperse funds and there is no evidence he is responsible in any way for withholding said funds from LP Ohio. We have removed his name from that paragraph to remove the implication he was involved in any meaningful way.

Editor’s Note: The views expressed are those of the author, they are not representative of The Libertarian Republic, its owners, other writers, or its sponsors.

Author’s Note: The author of this piece was a volunteer on the McAfee/Weiss campaign from March to May of 2016. She has a very close personal relationship with Judd Weiss. In summer of 2016, she was contracted to work on the Johnson-Weld campaign. After a short time assisting with the campaign’s YouTube presence in August into September, she opted not to invoice the campaign and to discontinue working with them due to personal time constraints. She considers her time with the campaign as a volunteer, and has no interest in speaking negatively about her personal experience with the campaign. The campaign does not owe her any money and there are no bad terms between them. She voted for Johnson-Weld in the general election, and wrote a piece of support for them here before Election Day.