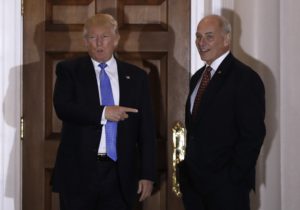 Following what has been a tumultuous couple days in the White House, with the Republicans newest failure to repeal Obamacare, and President Donald Trump’s infighting with staff, it appears the President has made the decision replace his Chief of Staff.

Former Republican National Committee Chair Reince Priebus had been serving the Trump administration as right hand to the President, since day 1, but recently came under harsh scrutiny. Newly appointed White House Communications Director Anthony Scaramucci, who has shown not to be a big fan of the former RNC chair, took many shots at Priebus. First, Scaramucci accused Priebus of leaking personal information to the media, then he called the Chief of Staff a “Fu****g paranoid Schizophrenic,” and finally, he compared his relationship with Priebus to the Biblical story of Cain and Abel, and we all know how that ended. Others, like Fox News panelist Geraldo Rivera, had mentioned the threat that Priebus represented to the President’s agenda by claiming that he was a part of the “deep state.” It was clear that Priebus was no longer in the good graces of many around the President, and that his time advising Trump was coming to an end.

Following Scaramucci’s comparison, it appears Priebus’ fate was sealed late Friday when President Trump took to twitter, as he always does, to announce that the former RNC chair would be replaced by Department of Homeland Security Secretary Gen. John Kelly as Chief of Staff.

I am pleased to inform you that I have just named General/Secretary John F Kelly as White House Chief of Staff. He is a Great American….

…and a Great Leader. John has also done a spectacular job at Homeland Security. He has been a true star of my Administration

Trump did explain that he was thankful of Priebus for his “service and dedication to his country,” going on to say that they had accomplished a lot together, and he was “proud” of him.

I would like to thank Reince Priebus for his service and dedication to his country. We accomplished a lot together and I am proud of him!

“Reince is a good man. John Kelly will do a fantastic job,” Trump told reporters, according to CNN, just outside at Joint Base Andrews “General Kelly has been a star, done an incredible job thus far, respected by everybody. He’s a great great American. Reince is a good man.”

Priebus, a GOP insider, was believe to have been brought into the President’s inner circle as a bridge between the outsider President and the Washington machine. Unfortunately for him however, the former RNC chair ended up becoming a punching bag and was blamed for most of the legislative losses during thus far into the Trump presidency.

Woman Wanted Her Dog To Have ‘Gender Reassignment Surgery’