White House communications director Anthony Scaramucci described his tumultuous relationship with Chief of Staff Reince Priebus as similar to that of biblical characters Cain and Abel during a Thursday interview.

“If you want to talk about [Reince Priebus], we have had odds. We have had differences. When I said we were brothers from the podium, that’s because we’re rough on each other. Some brothers are like Cain and Abel. Other brothers can fight with each other and get along. I don’t know if this is reparable or not, that will be up to the president,” Scaramucci said during an unscheduled call in to CNN’s “New Day.”

Scaramucci’s comments come hours after he referenced Priebus in a since-deleted tweet in which he wrote, “In light of the leak of my financial disclosure info which is a felony. I will be contacting @FBI and the @JusticeDepartment #swamp @Reince45.”

The newly appointed communications director later denied that he was accusing Priebus of having leaked his disclosure form.

Wrong! Tweet was public notice to leakers that all Sr Adm officials are helping to end illegal leaks. @Reince45 pic.twitter.com/AB0reseuX1

Rumors of friction between Scaramucci and Priebus have followed the pair since Scaramucci was appointed to his new role Friday. The New York financier first invoked brotherhood in his attempt to dispel accusations that he had a tense relationship with Priebus after reports emerged indicating that Priebus lobbied against his appointment.

“We are a little bit like brothers where we rough each other up once in awhile, which is totally normal for brothers,” Scaramucci said during the Friday press conference. “There’s a lot of people in here that have brothers, so you get that. But he’s a dear friend.” 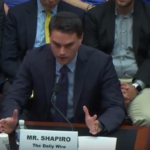