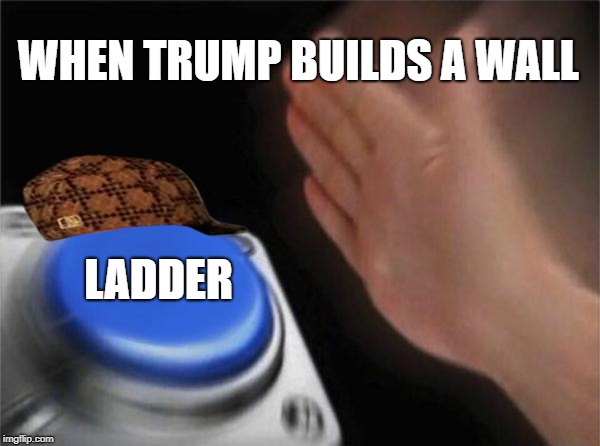 GoFundMe the “Hey, can I borrow 50 bucks” of crowd funding platforms has helped people raise funds for everything from medical bills to charity scams. In 2016 two friends unsuccessfully fundraised for a Burning Man trip. On a serious note crowd funding is changing the way political movements are financed by letting average people fund them rather than established organizations.

The MAGA dumdums are crowdsourcing money for the wall.

Should we crowdsource money for ladders just to troll them?

I’m raising money for Build a Giant Escalator Over the Wall. Click to Donate: https://t.co/mzfINPz7wU via @gofundme

Brian Kolfage‘s GoFundMe campaign “We The People Will Fund The Wall” campaign has already surpassed 12 million dollars within the week. Now two counter protest campaigns called “Ladders To Get Over Trump’s Wall” and “Build a Giant Escalator Over The Wall” have launched to both troll and raise money for an immigrant charity called RAICES.

The funniest thing I’ve found so far while researching this whole #GoFundTheWall thing, has been coming across a competing GoFundMe that is raising funds for ladders to climb over the wall. What is life? 😂😂😂 pic.twitter.com/0zcxn1IcKs

From the Ladders To Get Over Trump’s Wall:

We saw some folks are raising money for a border wall to keep out our migrant siblings and fellow human beings, who are fleeing violence and persecution and whose tragically-underpaid labor is essential to the U.S. economy. Seems like a bad idea on countless levels for everyone involved.  Maybe we should focus on human rights and creating a community that reflects our supposed values.

And even though at a rate of $1.7 million daily, it would take their fund about 35 years to raise the $21.7 billion that Trump’s own Dept. of Homeland Security says would be needed  to build said wall, we wanna make sure ladders are ready to send over to our undocumented friends and help them.

If this seems ludicrous, we welcome you to the coalition of reasonable adults.

Should we not reach our goal–or should they (ahem) not reach theirs–all funds raised will go to the Refugee and Immigrant Center for Education and Legal Services (RAICES) , a Texas-based 501(c)(3) nonprofit agency that promotes justice by providing free and low-cost legal services to underserved immigrant children, families, and refugees.

From Build a Giant Escalator Over the Wall:

The wall is never going to be built but just in case it is we will build a series of giant escalators that are spaced out a half mile along the wall on either side and if that doesn’t happen we’ll just give the money to people who care about the well being of human beings no matter where they’re from.

The escalators are a metaphor please do not come and investigate me ICE or whoever I’m not really going to build a series of giant escalators. To be clear the money goes to RAICES a very worthy immigrant legal services charity.

Donate to the giant escalator here.

Donate to the ladders here.

Donate to the wall here.