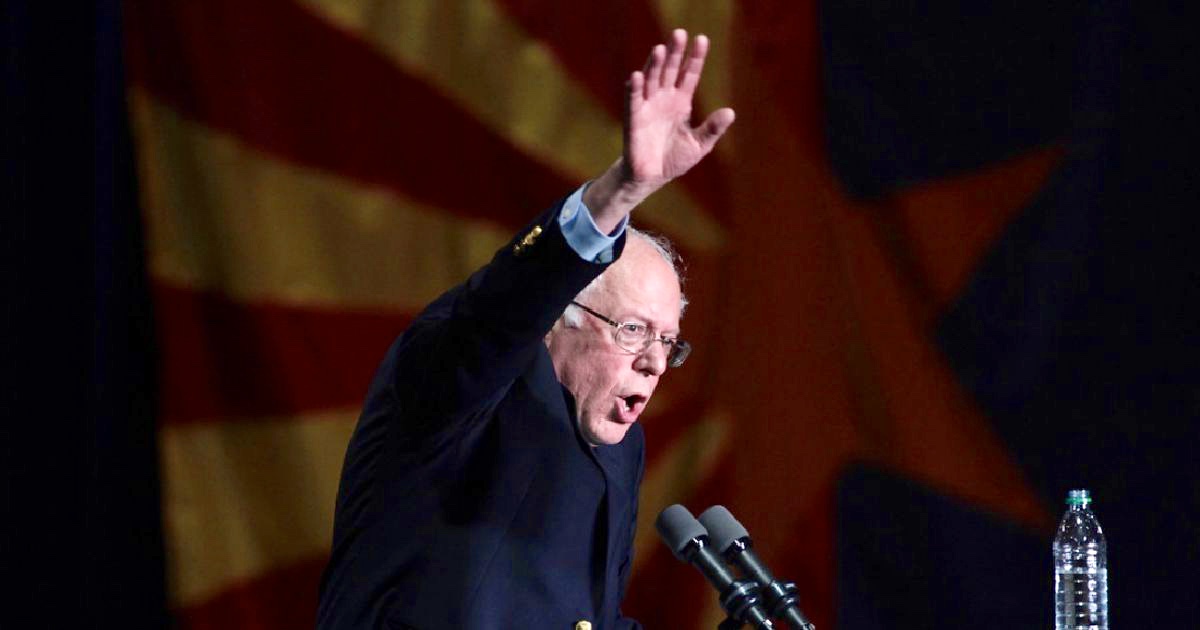 “Maybe I’m old fashioned. But I believe we should have a president who believes in the United States Constitution,” Senator Bernie Sanders (D-VT) tweeted Sunday afternoon.

Maybe I'm old fashioned. But I believe we should have a president who believes in the United States Constitution.

I applaud Senator Sanders for his bold, accurate statement that Americans should have a Commander-in-Chief who upholds our constitution. I also sincerely hope that the gentleman from the state of Vermont realizes that this disqualifies him as being fit to serve as our president. Since the overwhelming majority of his campaign platform is unconstitutional, this is essentially a hint to the American people that he will soon drop out of the 2020 Presidential Race.

The Constitution is a document that limits government power, government regulations, and government interference which is polar opposite of your Domestic platform.

So, when are you officially throwing in the towel then?

Nice way to announce you’re dropping out of the race @BernieSanders. Thank you!

Bernie, I ask you, sir, where in the constitution does it grant you the authority to do about 95% of the things you promise your supporters that you will do should you become the President of the United States? In case you have forgotten, Senator, Article II Section II only grants the president the authority to declare war and sign peace treaties should he have Congressional approval, nominate officials such as supreme court justices and ambassadors with the approval of Congress, and grant pardons. Any action taken outside of these expressly limited powers by the Executive branch is an overreach, sir.

It should also be noted in Article I Section VIII, where the powers of the federal government are listed, not one of the enumerated powers include granting the government power to get involved with healthcare, federally guarantee jobs, or any of the other massive government programs which would require an incredible amount wealth redistribution. Any student of history would also be aware of the fact that Bernie’s plan to tax the extremely wealthy flies in the face of the Founding Fathers’ original intent for our Constitutional Republic.

[RELATED: Bernie Sanders: “Yes, I Will Raise Taxes On Everybody”]

According to MountVernon.org, the people living in Colonial America only paid between 1%-1.5% in taxes. Let that sink in for a minute. Our ancestors started a rebellion against a tyrannical government, which taxed its citizens around 1%. Compare this to Bernie’s proposed 77% estate tax! It doesn’t take a doctorate degree in American History to see that our forefathers would be shooting long before someone like Bernie Sanders attempted to occupy this country’s highest office.

This brings me to another very important point. If Senator Sanders really gave a damn about the constitution he would remove gun control as a plank from his campaign platform. He would recognize that all gun laws are an infringement on the second amendment, and a disgusting assault on individual liberty and private property rights. Instead, what we see is Bernie calling for an “assault weapons” ban while continually spouting off lies about a “gun show loophole.”

It’s no secret that the Founding Fathers would be considered radical gun nuts to Senator Sanders and his Progressive friends. These men understood that individual firearm ownership is essential to the maintenance of a free society. Consider the words of Elbridge Gerry, a signer of the Declaration of Independence, in reference to private gun ownership and the need for a militia.

“What, Sir, is the use of a militia? It is to prevent the establishment of a standing army, the bane of liberty …. Whenever Governments mean to invade the rights and liberties of the people, they always attempt to destroy the militia, in order to raise an army upon their ruins.” I Annals of Congress 750, August 17, 1789

Why would a Founding Father utter such strongly pro-gun language? Remember, these men had just fought a war to throw off the chains of an oppressive tyrant. One could argue this tyranny was far less than what modern Americans currently endure. Nevertheless, they understood that force is sometimes needed to protect individual liberties.

It is highly ironic that a candidate for President of the United States would criticize someone else for not upholding the constitution when about 95% of his own platform completely ignores the constitution and the Founders’ warnings about an unchecked and bloated State.

I do not wish Bernie any harm, nor do I think he is a bad man on a personal level. However, make no mistake about it – if his vision for this country were to be implemented, the results would be the greatest loss of liberty and individual freedom in the modern era.

If the gentleman from Vermont is serious about having a president who respects the constitution as the supreme law of the land, there are only two possibilities moving forward. The first being a complete renouncing of his Marxist ideology and embracing of the economic teachings of Adam Smith. The second choice would be to realize his current beliefs render him unfit to serve as Commander-in-Chief and drop out of the race.

I want to believe the sincerity of your words Bernie, so please tell the American people – what your decision will be?