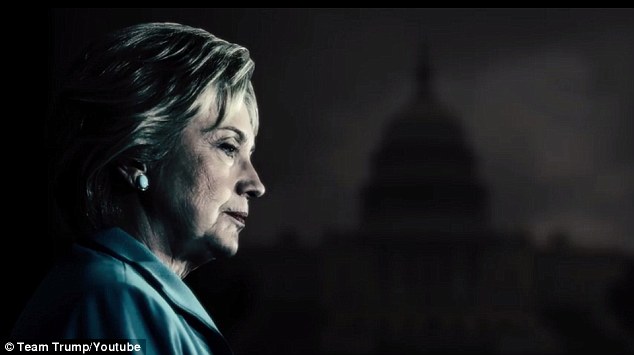 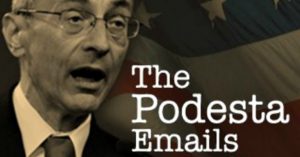 Whistleblower website Wikileaks has just dropped their third set of emails taken off the server of Democratic Presidential candidate Hillary Clinton‘s campaign chairman, John Podesta. In the newly released emails is a shocking admission from Podesta regarding Clinton and her true feelings about “everyday Americans.”

I think if she doesn’t say it once, people will notice and say we false started in Iowa. 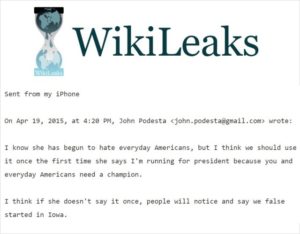 According to Wikileaks, Jennifer Palmieri, Director of Communications for Hillary’s presidential campaign, agreed with Podesta, responding with only, “Truth.”

Clinton, from a transcript of a Goldman Sachs speech, also released by Wikileaks, has even admitted to being “far removed” from the middle class.

I’m kind of far removed because the life I’ve lived and the economic, you know, fortunes that my husband and I now enjoy,” Clinton told members of Goldman-Black Rock in February 2014. “I am not taking a position on any policy, but I do think there is a growing sense of anxiety and even anger in the country over the feeling that the game is rigged.” 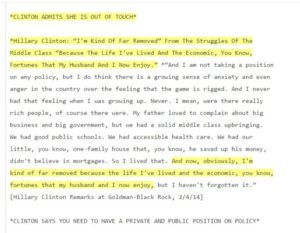 This email and transcript, along with another from Podesta to a Clinton campaign surrogate, Bill Ivey, where the two speak about the need to create “an unaware and compliant citizenry,” show not just Clinton’s imperial disregard for the voters she needs to win the presidency, but that this notion underlies her entire campaign. Clinton and her machine appear to only see voters as a medium or tool to garner power, similar to their view on military action, not as “We the People,” who she is supposed to represent.

It is time that we as citizens take a look at the candidates we are allowing to control us; should they not hold some respect for the voters? Do we allow this sort of patronizing and disdain without recourse?

“We the People,” need to do some soul searching, stop settling for the “lesser of two evils.” The longer we apathetically allow the system to pick our voices, the longer we will continue down this rabbit hole. Is it not time to break the political paradigm and demand our voices back?

What Would Happen if Hillary Said She “Grabbed Men by the D*ck”?