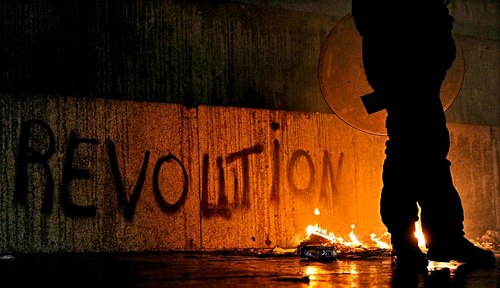 “Rebellion to tyrants is obedience to god.” –Benjamin Franklin

Letter from the Editor, Re: Stance on police

The Libertarian Republic is not an “anti-police” website. TLR is against abuses of authority. The police, military and all government officials (elected and appointed) are public servants. They are endowed with certain enumerated powers in order to secure our life, liberty and pursuit of happiness. To the extent that they operate under such constitutional guidelines, their governance is legitimate under the principles of natural law. The only legitimate role for any government (if there must be one) is the protection of individual liberty.

When authority over steps its enumerated powers and violates those rights, they are to be reprimanded or removed from their posts after legitimate due process. But if there is resistance to those precepts, We The People may also invoke the right to revolution.

The right to revolution is codified in many state constitutions across America. For instance, the State of Texas’ constitution states:

“All political power is inherent in the people, and all free governments are founded on their authority, and instituted for their benefit. The faith of the people of Texas stands pledged to the preservation of a republican form of government, and, subject to this limitation only, they have at all times the inalienable right to alter, reform or abolish their government in such manner as they may think expedient.”

And here we have a passage from the constitution of the State of Pennsylvania:

“All power is inherent in the people, and all free governments are founded on their authority and instituted for their peace, safety and happiness. For the advancement of these ends they have at all times an inalienable and indefeasible right to alter, reform or abolish their government in such manner as they may think proper.”

And consider that of Kentucky:

“All power is inherent in the people, and all free governments are founded on their authority and instituted for their peace, safety, happiness and the protection of property. For the advancement of these ends, they have at all times an inalienable and indefeasible right to alter, reform or abolish their government in such manner as they may deem proper.”

It is clear that the many governments of America constitute a federation of states committed largely in principle to the theory of individual rights consistent with natural law. We The People may temporarily contract with any guardian of those rights if they are institutionalized in a manner consistent with those rights. Therefore, any public servant or even, any institution hostile to those freedoms are subject to being ‘altered or abolished’.

The right to revolution is an inherent right, and is separate from terrorism. Terrorism is a criminal act, but revolution is a principle of general law. It is what distinguishes the acts of September 11th, with the Arab Spring. Revolution and resistance to tyranny in Western tradition can be found in biblical traditions, such as the case of Judith, who beheaded Holofernes in order to free her people from his oppression.

Holofernes was an invading general who was dispatched to conquer the Jewish people for refusing to worship Nebuchadnezzar. Holofernes encircled the Israelites, cutting off their water supply and demanded they bow to Nebuchadnezzar. They were saved by Judith, a beautiful Hebrew widow who seduced the general and then beheaded him when he was drunk. Her act of violence was not terrorism, it was an act of self-defense. Her resistance to tyranny was obedience to God.

We at The Libertarian Republic are committed to our role as night watchmen in defense of individual liberty, natural rights and legitimate republican governance. If our public servants are in compliance with those limitations on their power, they have nothing to fear from our free speech. But for those who are hostile to those rights, we will expose them to the harsh light of public scrutiny. After all… if you have done nothing wrong, then you must have nothing to hide, correct?

Ultimately, it is We The People who must be the guardians of our own life, liberty, security, and property. If our public servants behave in a manner inconsistent with those rights, then we are compelled to act, and to engage in our natural rights to free speech as protest. There must be independent guardians of the public liberty, who are committed to watching the watchers.

The Libertarian Republic commends, honors and respect those public servants who risk their own lives, liberty and security in defense of innocent’s lives, liberties and properties. When they behave with honor, they deserve our accolades and appreciation and will receive it.

But if, after a long train of abuses and usurpations, pursuing invariably the same Object evinces a design to reduce us under absolute Despotism, it is our right and indeed our duty, to throw off such government, and to provide for new guards for our future security.

Your friend in liberty,