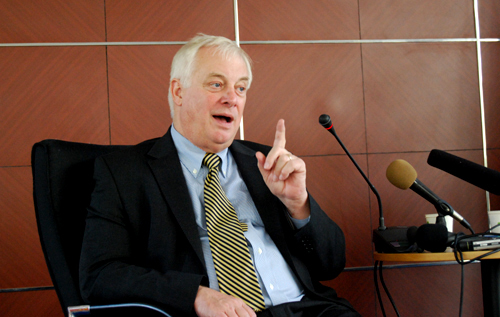 The chancellor of Oxford University in the U.K. said Thursday that students unhappy about a Cecil Rhodes statue on campus should consider moving to a different school, or even to China.

A student movement at Oxford called Rhodes Must Fall has been campaigning for a statue and plaque honoring Cecil Rhodes to be removed from the grounds of Oxford. The movement draws its name and inspiration from a similar effort in South Africa, which successfully achieved a teardown of a similar statue at the University of Cape Town.

Protesters argue that Rhodes, a mining magnate who was a strong advocate for the British Empire, was complicit in the subjugation and genocide of African peoples, and that physical traces of his legacy at the college should be eradicated. But Oxford chancellor Christopher Patten said Wednesday that if students can’t accept Rhodes’ legacy, warts and all, then maybe they should just leave Oxford.

“If people at our university aren’t prepared to show the generosity of spirit which Nelson Mandela showed towards Rhodes and towards history … then maybe they should think about being educated elsewhere,” said Christopher Patten during an appearance on Radio 4.

Patten accused anti-Rhodes activists of trying to cover up the past and silence dissent, and compared them to protesters in the U.S. who have tried to establish “safe spaces” and eliminate monuments to figures like Woodrow Wilson. He proposed they consider attending college in China rather than trying to foist their views on students in the U.K. and U.S.

“If you want universities like that, you go to China where they are not allowed to talk about ‘western values,’” Patten said.

Rhodes Must Fall campaigners responded to Patten’s words by denouncing the school as “institutionally racist.”

“We think it is scandalous that Lord Patten thinks that people who disagree with him should study at another university at the same time as purporting to support generosity of spirit and open mindedness,” Sizwe Mpofu-Walsh, one of the group’s leaders, said on Radio 4.

The effort against Rhodes is complicated by the fact that Rhodes’ estate was used to fund the Rhodes Scholarship, widely considered the most prestigious scholarship in the world. At least one of the leaders in Rhodes Must Fall is himself a Rhodes Scholar, who argues his position is not hypocritical, as he is merely taking back wealth Rhodes stole from Africa. (RELATED: Oxford Students Want To Dump Rhodes, But Not His Scholarship)

Despite his strong rhetoric, Patten’s words won’t necessarily dictate university policy. The chancellorship of Oxford is a mostly ceremonial position, while actual administrative powers are vested with the school’s vice chancellor. Oxford installed Louise Richardson as its new vice chancellor just days ago, so how she will handle the controversy is unclear. In her installation speech, Richardson encouraged students to be “open-minded” towards competing views.

One Chart Shows Just How Total Hillary’s Collapse Has Become