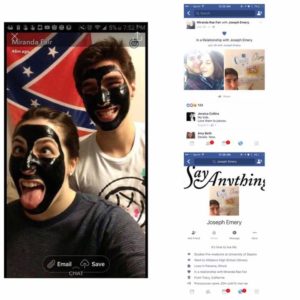 The journalist Shaun King recently posted an image of Miranda Fair and Joseph Emery, claiming that they were both celebrating Trump’s victory through the use of blackface and posing in front of a confederate flag. This image started trending on both Twitter and Facebook, people were outraged and asked for them to be expelled from their respective schools. What King did not realize is that it was a poorly placed picture, it was taken weeks ago,they were both wearing charcoal face masks and the flag in the background was cut/torn in half. The flag was purposefully defaced.

I study at SIUC and know Miranda personally and consider her my friend. She is one of the sweetest individuals I have met, she is selfless and willing to talk to any person that goes up to her and not racist. Like many of the individuals that shared King’s post, I can guarantee she is also unhappy that Donald Trump is the president elect. Shaun King potentially ruined Miranda’s and Joseph’s life by making false accusations and sharing their names and he does not have to worry about being harassed online, or potentially being kicked out of school for an action not committed.

These accusations made by King, represent an epidemic occurring across the country, social media, and college campuses. They represent a new kind of intolerance; they represent an intolerant left. Progressives preach for equality and diversity, but do not tolerate diversity of thought. Many students on college campuses are not able to voice their opinions out of the fear of being racist, homophobic, or xenophobic. This intolerance has gotten so out of hand that people no longer ask questions and just assume the worst. Because if you come from a position of “privilege”, you have no life struggles. These elections are the perfect example of this.

A number of individuals are so dumbfounded by Trump’s victory, but they should not. These are the consequences of silencing individuals and not allowing them to speak their minds. They spoke with their votes. The left has created a hostile environment for debate and different opinions, it is hard to convince people to agree with you when you silence them because of their “privilege”. And following the elections progressives have become so hostile to any individual with different opinions, that people like Miranda and Joseph are caught in the crossfire. Two college students whose life could potentially be ruined, due to false accusations, assumptions and the ineptitude to ask questions.

Hannity & Maddow Construct DeLorean to Go Back to 2005 Positions

How Safe Spaces Can Make Us Free Again