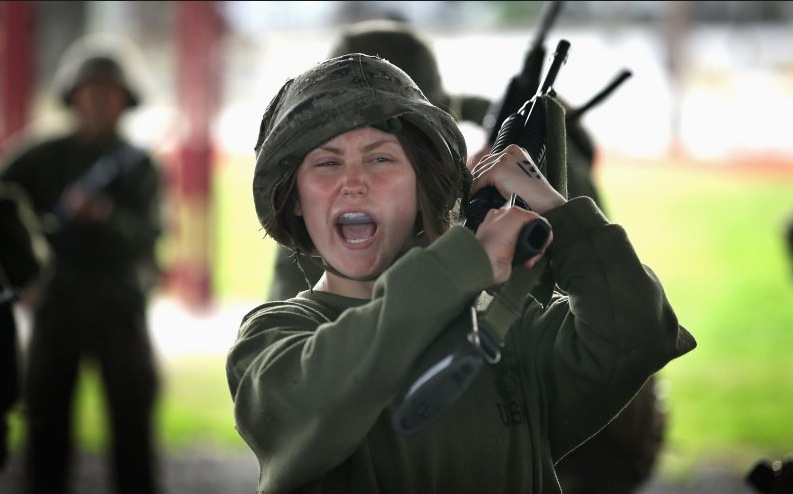 The study, called the Ground Combat Element Integrated Task Force (GCEITF), was conducted with 200 male and 75 female volunteers to provide officials with more information on how females perform in ground combat situations.

Defense Secretary Ash Carter intends to open all combat specialties to women at the start of 2016, unlessthe services specifically request exemptions. Those exemptions have to be backed by detailed evidence and must be submitted by October, Christian Science Monitor reports.

What the study found is that women are about 15 percent less powerful than men, and that in terms of performance on the distribution, “the female top 25th percentile of women overlapped with the bottom 25thpercentile for males.” A lack of power means, for example, that men were able to throw their heavy packs on top of the wall, but females required assistance.

Men had better firearm accuracy, hitting targets 44 percent of the time, in comparison to females, who only scored at 28 percent. Male-only squads were also faster.

Women also were more likely to suffer injuries, a conclusion backed by research from the British Ministry of Defence, which found that because of physiological differences, women are burdened with musculoskeletal injuries at a rate 10 times higher than men. If a woman has to carry a pack more than 25 percent of her bodyweight, her risk of injury skyrockets by five. (RELATED: Military Services Have Until October 1 To Justify Keeping Women Out Of Combat Roles)

In the GCEITF, the actual injury rate for women, focusing on muscles, tendons and ligaments, was 40.5 percent. Men came in with an injury rate of only 18.8 percent. Despite the results of the GCEITF and the fact that no female volunteers passed the infantry officer course opened earlier this year, it’s unknown whether the findings will be convincing enough to persuade Navy Secretary Ray Mabus, who has previously gone on record stating that he does not see a reason for requesting an exemption and that ultimately, it’s his call. (RELATED: Navy Sec Signals Intent To Let Women Be Marine Infantry, Special Ops)

The Navy’s top admiral also recently said that the service intends to open up the Navy SEALs to women, so long as they can complete training at existing standards. (RELATED: Top Admiral: Elite Navy SEALs Will Open Up To Women)

The Army, Air Force and Navy have not yet officially said whether they will seek exemptions or not.