Like an old beat Ford, it’s time to scrap this Maverick

When he isn’t posing for photo-ops with radical Islamic kidnappers or eating dinner with the president as rising stars of his party stage a historic filibuster, Arizona Senator John McCain enjoys muddling international diplomacy and insulting world leaders in the process—or so it would seem. 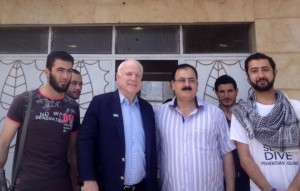 Discontented that diplomacy has stymied US war drums over Syria, McCain penned an angry essay regarding Russian President Vladimir Putin for the online edition of the Russian newspaper Pravda.  His tirade did not defend the much maligned foreign policy of the US, a subject which Putin addresses thoroughly in an open letter to the American people, which appeared in the New York Times, but instead focused his attack on the Russian head of state.  McCain wrote “I believe you deserve a government that believes in you,” and declared that he was “Pro-Russia,” while the Putin regime was not.

The Arizona Senator is badly out of line by interjecting his opinion into a fragile diplomatic situation.  The world community, the congress, and the American people have rejected US military intervention in Syria. Many were relieved that diplomacy had been given a chance to work. Not John McCain. Arizona’s Maverick has decided to attack the man leading the diplomatic arrangement.

McCain’s assertions that Putin rules by intimidation, is anti-Russia, and doesn’t believe in the Russian people, flies in the face of overwhelming Russian support of the Russian president.  Putin’s approval rating, always considerably higher than most US politicians, has risen dramatically since the Syrian crisis took the center stage of geopolitical theater. Meanwhile, McCain’s own approval ratings are dismal and he is constantly finding himself at odds with others in his party and the American people.

What makes matters worse is the Senator’s hypocrisy.  “You should be governed by a rule of law that is clear, consistently and impartially enforced and just. I make that claim because I believe the Russian people, no less than Americans, are endowed by our Creator with inalienable rights to life, liberty and the pursuit of happiness.”  It is so nice of Senator McCain to praise the values of America’s founding to Russians as he works so hard to undermine those very values here at home.  A Rule of Law, Mr. Senator?  Why no concern when you were defending the authority of the president to detain indefinitely ,or even kill American citizens without trial?

When you evoke inalienable rights, Mr. Senator? Do you understand that our Bill of Rights was written to protect those very rights?  Why do you author bills which violate the First Amendment?  Why don’t you defend the Second Amendment?  Why do you support NSA warrantless surveillance of Americans, in direct violation of our Fourth Amendment?  We have already covered your apparent disdain for due process—so much for the Fifth and Sixth Amendments.

Although your own experience as a POW has taught you that torture is wrong, you still support the ongoing cruel and unusual punishment detainees are subjected to in the form of indefinite detention without charge, trial or council.  You have proven that on some issues, such as the Defense of Marriage Act, you will usurp state rights, so the Ninth and Tenth Amendment are not safe, either. As far as I can find, you have never supported the quartering of soldiers in Americans’ homes, nor have you tried to interfere with civil law suits, so we may rest assured that two amendments of the Bill of Rights, the Third and Seventh, are safe on your watch, Senator McCain.

McCain is badly out of touch with his constituents, his party and his country.  He has found himself on the side of president Obama on numerous issues, while criticizing popular rising stars of his party as “wacko-birds.”  The aging maverick of the GOP has become the poster child for a brand of Republicanism which is on its way to the scrap yard.  An oddity of an age long gone, McCain has never met a war he didn’t like, even when it is fighting alongside Islamic radicals.

Recently, the 77 year old maverick hinted that retirement may be in his near future.  For the love of every value you pretended to defend to the Russian people, Mr. Senator, please do not wait a moment longer.

Wouldn’t you rather have a benevolent monarchy than a tyrannical social democracy?