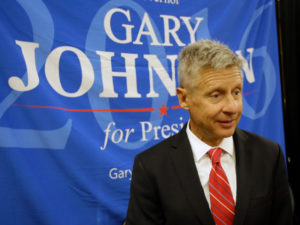 When Johnson took the stage he was welcomed warmly. He took to the microphone right away and began with addressing what has been called his latest “gaffe” when he was asked to name 3 world leaders he admired. Johnson used the “gaffe,” to lead into his diametric opposition of interventionism worldwide, as the crowd applauded.

He then shifted to the voters and recent polls which suggest that the Libertarian ticket does the best among independents. He dug into the Commission on Presidential Debates (CPD) for ignoring those independents saying, “[they have] no desire at all to see a third party on stage, representing what I think are the majority of Americans.”

Johnson continued on to explain the fact that not only is his voter base growing with independents, but with the millennials and active military personnel as well.

All of the listed above make for great selling points for Johnson, however it may have been two different incidences at the rally which could prove to be even more important to his voter base and those on the fence.

The first incident occurred about eleven minutes into Johnson’s speech, when he was speaking to the polarization in Congress and how the election of the Republican’s Donald Trump or the Democrats Hillary Clinton would not make it a more functional governing body, a heckler wearing a Trump 2016 shirt jumped on stage to Johnson’s right.

Only on stage for a few seconds, the heckler was heard saying “Trump 2016 right here everybody!” Johnson turned to look at the gentleman, and began to laugh. He responded by telling the crowd  to, ” give him his due, that is about the biggest piece of bullsh** that I have ever heard.” He then joked with the crowd, ” Thank you, that guy and I had breakfast earlier; don’t hurt him going out of here, that was planned…” Johnson then grinned and said,  “I’m just kidding.”

The heckler allowed the people to see a bit of Johnson’s personality, it gave them a real moment into who he was. It showed that he could handled being ruffled a bit, and still have the levity and comedic timing to add some humor into a situation which to some may be awfully frustrating or worrisome.

The second incident which occurred about 8 minutes later, happened to be a bit more serious, but it put on display Johnson’s genuine self, and his humanity.

One of his supporters, a lady named Heather Salyer, who was standing almost directly in front of the stage fainted. Johnson not wasting anytime to assist her, stopped his speech and stepped down from the stage to help the fallen supporter. He husband, Mark Salyer, took to his FaceBook, to talk about the incident, saying:

It was so nice to meet a man who cares about people than politics. Gary Johnson has a great vision for this country and a true passion for the people of this country.

My beautiful wife got so hot during his rally we were at that she fainted toward the end of Gov Johnson’s talk, hitting her head on the stage. This man stopped his speech, and came off the stage to Heather’s side to make sure she was ok. I could see true concern in his eyes. Heather was so embarrassed, and he said don’t worry about it and gave her a hug. We had four nurses (thank you all) at her side in seconds. We left a full ballroom and Heather was checked out by a great team from Phoenix Fire Department. Heather is sore, bruised and embarrassed, but is feeling better. Thank you to everyone who stopped to check on her at the rally.

On the way home I was thinking about Johnson stopping his speech and checking on my wife with true concern. Would Trump do this, I think he would insult and keep talking, Clinton would keep talking and use it to segue into healthcare. This is another reason I can vote for this man and feel good about it. 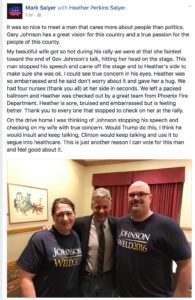 Ultimately we get to hear Gov. Johnson’s political banter all the time, but what is refreshing is to see his humanity. To see that beyond the microphone and talking points sits a real human being, who has real emotions and levity at the right time.

At this Phoenix rally, supporters did not get a generic political stump speech, or rhetoric. They got to see a man, deal with two very real incidents in a very raw way. Trump may claim to be the “outsider” in this political cycle, but Gary Johnson proves he is the outsider simply because he is willing to take a step back and have real life moments, even when some may not consider the moments to be politically beneficial.

114,000 People Want To Stop Paying Obama While He Stumps For Hillary