To Idiocy, And Beyond! 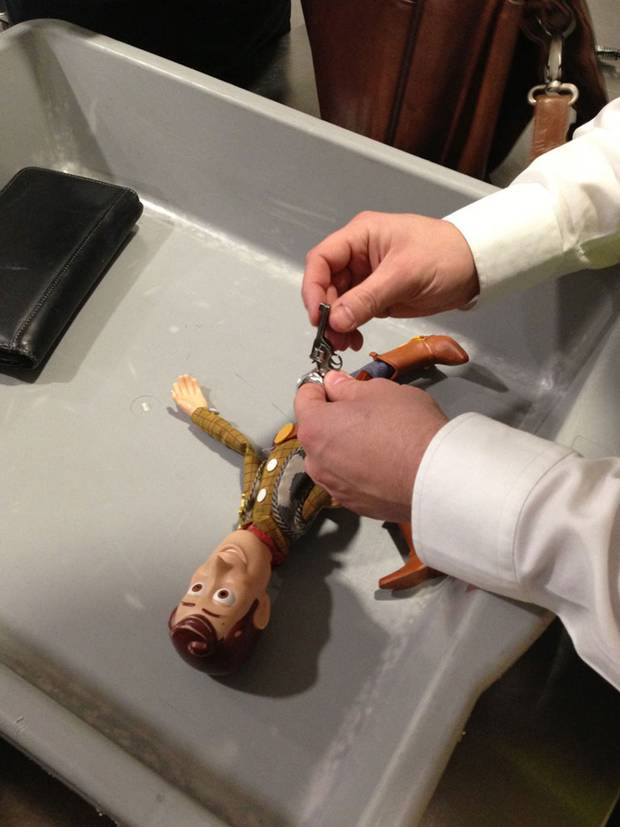 LONDON, U.K.— Reddit user jhazen27 was incredulous after Heathrow airport security confiscated his son’s Woody doll. The toy was a prop the father used in travel photos to send back to his son. After frisking the cowboy, the heroes at Heathrow discovered his toy gun and promptly disarmed him.

After the encounter, the father posted the photo to reddit, captioning it, “keep the world safe boys…” It’s unsure where the toy gun came from as the Woody doll doesn’t normally open carry, but the airport security’s overzealous reactions sparked some hilarious responses on the web.

“He crafted a tiny, fully functional revolver and was trying to smuggle it on the plane in Woody’s holster. TSA saved the day.”

“Pathetic. What happened to common sense?”

Airport security at Heathrow refused to comment on the matter, but this isn’t the first time a miniature toy gun has been confiscated by the people supposedly ‘protecting’ us.

A TSA agent in St. Louis confiscated a two-inch gun attached to a cowboy sock money named “Rooster Monkburn” last December. Phyllis May was “appalled and shocked and embarrassed all at the same time.”

While May and her husband were going through the invasive screening process, a TSA agent held up her bag and said, “Whose is this?” When May claimed ownership, she was subjected to a verbal lashing that borders on insanity.

The TSA agent told May she would have to confiscate the miniature gun and was supposed to call the police.

Ultimately, the police weren’t called, and May’s sewing supplies were returned, but they kept the offending toy pistol. TSA responded to the situation by stating, “TSA officers are dedicated to keeping the nation’s transportation security systems safe and secure for the traveling public. Under longstanding aircraft security policy, and out of an abundance of caution, realistic replicas of firearms are prohibited in carry-on bags.”

“Rooster Monkburn has been disarmed so I’m sure everyone on the plane was safe,” she said. “I understand she was doing her job but at some point doesn’t common sense prevail?”

Sadly Miss May, the term ‘common sense’ will never apply to an agency as useless and incompetent as the TSA.
Follow Faith on Twitter

Let them eat cake! The audacious spending behavior of the Obama family (VIDEO)