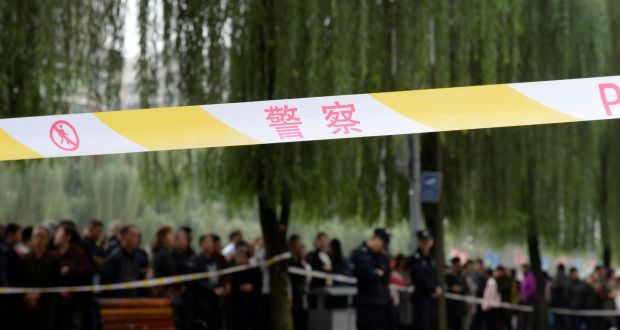 A woman used a kitchen knife to slash the faces of 14 children who were walking to their kindergarten classrooms in the central Chinese city of Chongqing on Friday.

Police from Chongqing City Banan District stated that a 39-year-old woman caught the children at around 9:30 a.m. local time as they returned from morning exercises to class in Yudong New Century Kindergarten, CNN reports.

The children were taken to a local hospital, some with bandaged heads, and local police detained the suspect, according to state media. Chinese officials have yet to release a motive.

Videos on social media reportedly from the scene show children with severe facial injuries and one being wheeled away on a gurney. School security and staff restrained the attacker before authorities removed her from the area, and video shows onlookers gathered at the scene yelling while attempting to kick and hit her.

A woman in China went on a stabbing spree in a kindergarten, hurting young children who were out on the playground. https://t.co/dA2EfQSHeC pic.twitter.com/1UHXubZlfP

Locals told CNN the kindergarten does not have its own park and children must walk to a nearby public park to play.

“It happened when the children were entering the school gate … The attacker just ran at them with a knife. The teachers were dumbstruck,” local resident Zhang Jing told CNN.

Knife attacks in China, specifically targeted against children, have happened multiple times in the past year. In 2018, nine children were killed in Shaanxi April 28 and two more in Shanghai on June 28.

Obama Says Politicians Lying Is Something ‘We Have Not Seen Before.’ Here’s Three Of His Biggest Whoppers

Americans Are Expected To Spend $9 Billion On Halloween, But That’s Not Just On Candy