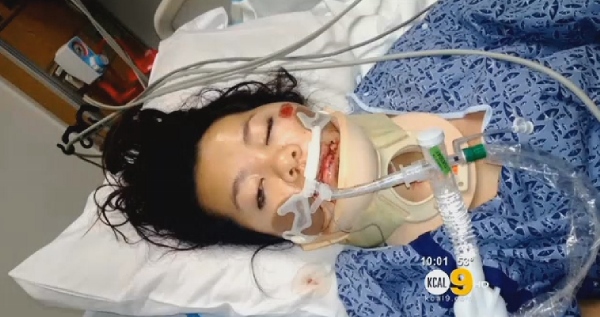 ‘What are you doing? You are a police officer.’ 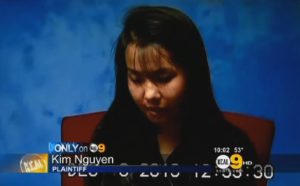 27-year-old pharmacist Kim Nguyen was hospitalized for two weeks, had her jaw wired shut, and lost several teeth after a security camera captured her tumbling from a moving LAPD squad car.

Around 2 a.m., Nguyen and two male friends were standing outside of a downtown restaurant. The three had been drinking and were waiting for a cab when, according to Nguyen and her companions, two nearby officers abducted Nguyen without apparent cause, driving away and leaving her male friends behind.

In a videotaped statement, Nguyen says that an officer then got in the back of the car with her and began molesting her. “I was struggling trying to get him off me,” she said in a statement. “‘I said, ‘What are you doing? You are a police officer.’ I said, ‘Stop,’” said Nguyen.

Nguyen says she does not recall falling from the police car. Because the back doors of patrol cars cannot be opened from the inside by civilians, she may have been thrown from the car by the police officers.

The Los Angeles times has identified David Shin and Jin Oh as the two officers involved. The officers remain in the field pending litigation.

WATCH: Poor Blacks In Chicago Respond To Obama’s State Of The Union (VIDEO)