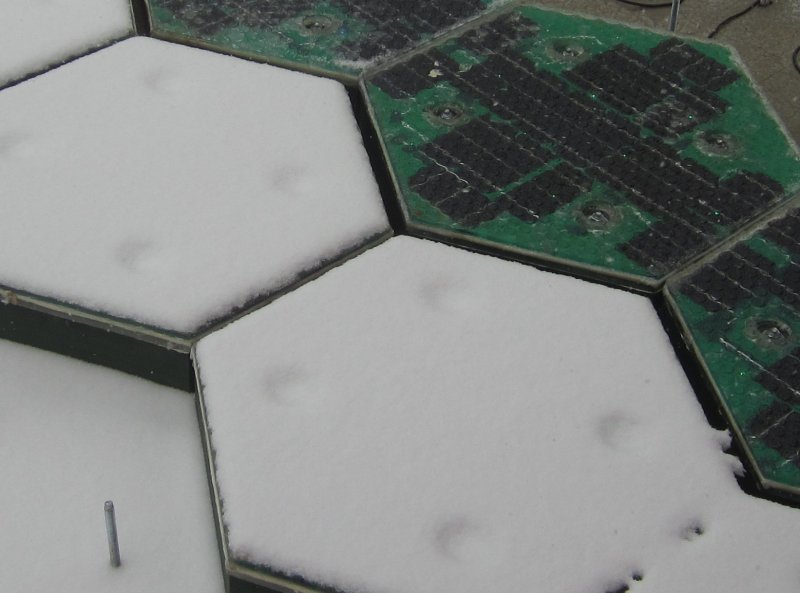 A new company called Solar Roadways is developing a ground-breaking new road surface that could revolutionize the entire energy and transportation industries. The solar panels could theoretically produce more energy than the entire United States uses if it were deployed nationwide.

Solar Roadways has developed a working prototype of their glass panel that they are crowdsourcing funds from in order to move forward towards full-scale production. The brainchild of Scott and Julie Brusaw, the hexagonal glass panels are fixed with LED lights that would be able to create safer roadways at night. The electricity generated from the panels could be directed to buildings, and even the cars themselves through induction.

These nifty panels also generate heat, which means that they’d be useful in keeping ice and snow off the roadways. The LED’s could make signs in order to warn drivers of any danger. Any excess energy produced by the panels could even be sold back to the power company.

Since all of the panels are wired to the grid, if any of them are broken you would know instantly and be able to tell exactly where the breakage occurs. There’s even talk about running high-speed Internet through the panels.

As of this moment the company has raised $110,000 of their $1 million goal, and you can help them towards that by clicking here.

Now we know the answer to the age-old question: Without government, who would build the hi-tech, solar-powered, energy-saving roads? Apparently, the private market. Take that Solyndra!