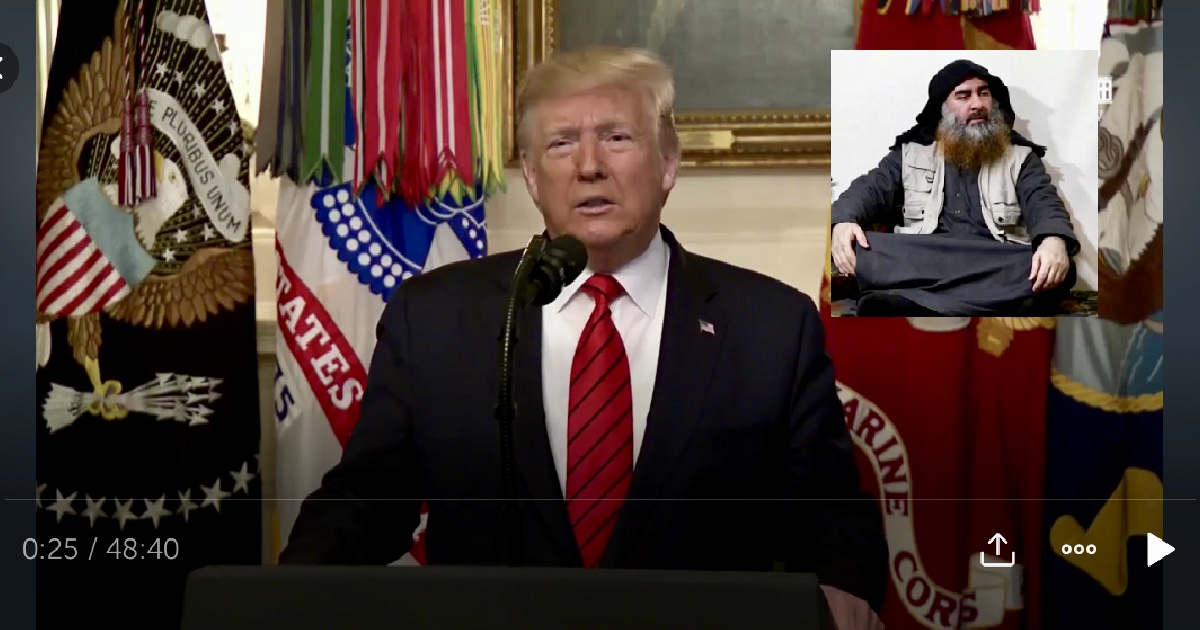 The mission was reportedly greenlit by President Trump, who tweeted out a vague foreshadowing of the result, saying “Something very big has just happened!”

Something very big has just happened!

According to Newsweek, who broke the story, the “Defense Department told the White House they have “high confidence” that the high-value target killed was Baghdadi.”

The story from Newsweek confirmed what had happened in an American helicopter raid in done in Idlib, a province in Northeastern Syria. Charles Lister, a fellow at the Middle East Institute, broke that story on Twitter, citing local sources on the ground.

BREAKING – reports of a (US?) helicopter-borne raid on a convoy of Huras al-Din (#AlQaeda in #Syria) leaders traveling near Barisha in #Idlib.

Locals say as many as 6 choppers involved – gave chase to convoy, 2 landed & assaulted vehicles. Possibly took bodies or evidence away.

The sources said that up to 6 helicopters chased down a convoy containing multiple high level ISIS leaders and militants. Two of the helicopters reportedly landed and attacked the vehicles, and possibly removed bodies or other evidence after their mission was accomplished.

The Trump Administration confirmed the reports Sunday morning, touting it as a major foreign policy win for the administration.

Baghdadi, who is of Iraqi national origin, is an ultra-fundamentalist cleric who took part in the Islamist mutiny against U.S. forces after the 2003 war that succeeded in removing Iraqi President Saddam Hussein from power and saw him killed three years later.

He attained the highest level of leadership in the group in 2010, following the death of his predecessor at the hands of a U.S.-Iraqi joint operation.

He spent time in the infamous military prisons of Abu Ghraib and Camp Bucca for his role in the anti-Western insurgency.

Upon his release, he joined Al-Qaeda in Iraq, attaining higher positions before merging with other radical Islamist groups to form the Islamic State of Iraq.

The specifics of his death are still emerging, but there is ample reason to believe that he detonated his own explosive suicide vest in the attack, as first reported by Defense One.

In the Sunday morning presser at the White House, Trump said that Baghdadi died “whimpering and screaming.” Trump also confirmed that no American troops were killed in the mission, thankfully.

In that press conference, Trump was also quick to thank the Russians who allowed us to use their airspace for the mission, as well as Iraq, Turkey, Syria and the Kurds for providing the necessary intelligence and information for the attack to go as smoothly as it did.

President Trump had some choice words for Baghdadi, saying “He died like a dog. He died like a coward. The world is now a much safer place.”

This appears to be the single greatest mission success since a similar attack killed 9/11 mastermind Osama bin Laden in 2011 in the so-called War on Terror. All Americans should be proud today— the good guys won a major victory, and we are one step closer to securing a Middle East free of the scourge of Islamic terror that has rocked the world over.

How To Carve a Ron Paul Pumpkin