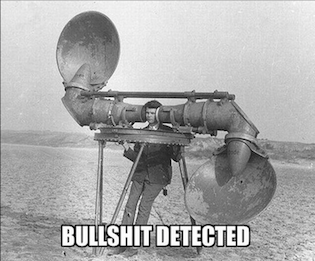 Are you a Penn Jillette style libertarian?

Penn fits the perfect stereotype of the skeptical libertarian. The Vegas megastar magician opines on love, reason, science and religion in a discussion posted on the “Big Think” Youtube series. Although free market ideas amongst the United States are considered to be solely the stronghold of the religious right, it’s a rising notion that people in America can be free to be openly secular defenders of free market capitalism.

Jillette’s friend Christopher Hitchens recently passed away from esophageal cancer. Penn says, “My friend, who I miss very much, Hitch, Christopher Hitchens, said that wanting there to be a god was like wanting to live in North Korea, to give away all of your freedom. And for someone who loves freedom and loves people, I don’t think you should hope for God at all.”

Does believing in an all powerful god mean giving up your freedom if the choice of whether or not to repent is mandatory on pain of death? What does that mean for the spirit of liberty in general if after death it becomes moot? If there were an afterlife, would it be a friendly place or one to be feared? Modern secularists argue that the idea that you must repent or die places one in an immoral dilemma. If there is only one choice, it smacks of a one party state. Hence, the reference to North Korea. Is that a fair analysis of the belief system of modern day monotheists?

Websites, blogs and discussion forums like “The Skeptical Libertarian” and “The Non-Religious Right” are gaining attention and followers in the thousands in recent years. Although these groups of Sherlock Holmes style free-thinkers are a relatively small band of discontented disbelievers, they gained attention recently on TV segment broadcast by Fox station WXIX in Cincinnati. Journalist & investigator Ben Swann is a highly respected local anchor who brought The Skeptical Libertarian website to attention. His coverage of the GOP primary season through the 2012 Presidential campaign revealed dozens of instances of irregularities throughout the nomination process. Skeptical libertarians applauded Swann on their facebook page for his journalistic integrity when he issued a correction on his coverage that compared UK and US crime rates, failing to note that the two nations report violent crime differently. It’s rare for anchors to demonstrate such integrity and our friends over at The Skeptical Libertarian should be applauded for their own investigative prowess.

Keeping a skeptical viewpoint about new data helps you form an opinion based on the best possible information as it comes available. It’s not cynicism, but more a steadfast devotion to what is real and what are the facts. Champions of skepticism such as the Amazing James Randi and Dr. Michael Shermer are icons of critical thought and debunking. Their work is influencing a new generation of critical thinkers online who aspire to be truth seekers, deniers and debunkers in their own right. The dynamic debunking duo have hundreds of educational videos available for free online. Randi has a new documentary project being funded through Kickstarter that will examine his life spent ferreting out tomfoolery and hocus-pocus in society. It’s called “An Honest Liar: The James Randi Story” and should be interesting to watch as it develops.

Penn’s thoughts below and readers of The Libertarian Republic even further down.

Are there Nazis who call themselves “libertarians”?